You are here: Home / News / Arts and Recreation / Students explore arts careers through internships
Share this...

Students apply directly to the arts organizations, but the program provides funding and training. Each organization sets its own schedule. Internships range from 40 hours to 400 hours, nearly a full-time job. All interns are paid and provided with bus tickets.

Interns at Still Waters Collective, which supports youth in the language arts, created a 32-page magazine about Milwaukee arts, including articles on the other organizations in the internship program. Four interns spent four to five hours a week to produce it, in addition to time spent interviewing and attending events.

At Artists Working in Education, interns helped with its Satellite Studio program, which sends artists into Milwaukee parks to teach kids about art, including dance, sculpture and digital art. Tasha Smith, one of the interns at A.W.E., said she chose it because she was interested in a career in education.

“I wanted to get hands-on experience before I made the commitment,” she said. 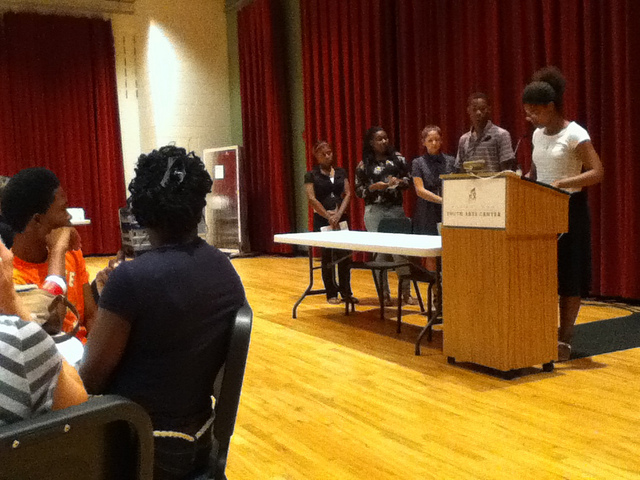 Interns from Artists Working in Education describe what they learned over the summer. (Photo by Alec Brooks)

Not all positions called for artists. Some involved managing an arts program, teaching children about art or assisting the agency’s clerical work.

“If there’s anything we’ve learned from this internship, it’s that you don’t need to be an artist to work in the arts,” said Kari Couture, community arts specialist for MPS and organizer of the program.

Students accepted into the program had a chance to look behind the scenes of the Milwaukee Art Museum and Danceworks. Students at both asked staff questions and learned about the daily operations of a metropolitan museum and a performing arts venue and school.

The program aims to not only teach high schoolers about art but also help them prepare for careers. To do that, interns are offered the chance to learn about creating resumes, communicating professionally and writing college application essays.

“They’re helping us prepare to be the future,” Ana’Nichelle Erdman said. “I really appreciated that.”

To gauge whether the program has helped them, interns are given a test before and after the experience. Last year, more than 90 percent said they felt more prepared for future jobs, better able to apply for jobs and more knowledgeable about careers in the arts. Statistics for this year are not available yet.

The interns came together one last time for an end-of-summer reception at the Milwaukee Youth Arts Center, 325 W. Walnut St. Interns from eight organizations talked to the group about their summer experiences.