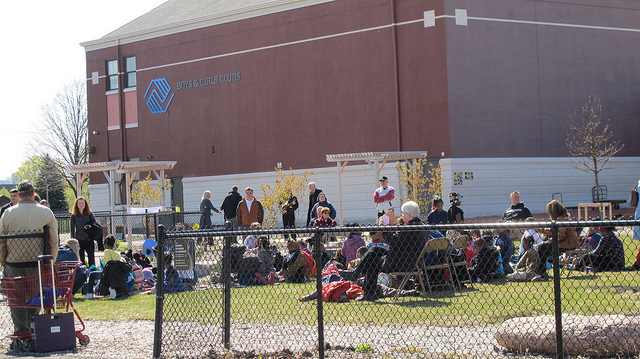 Brown Street Academy is one of two Milwaukee Public Schools to win $25,000 grants from the Give with Target campaign. The schools were among 100 nationally to receive grants to improve students’ learning.

“We are ecstatic to know that our school was chosen to receive additional funding at such a time as this when budgets are tight and needs are great,” Brown Street Academy principal Ava Morris said in an email. She added that it has not been decided how the funds will be spent, but noted, “It will be a collaborative decision between administration and staff as to how we can best improve student achievement.”

In a press release announcing the grants, MPS Superintendent Gregory Thornton commented, “We’re so pleased with the increasing commitment Target has shown to Milwaukee Public Schools.”

In the spring, students, City Year members and Target volunteers gathered at the Hopkins-Lloyd Community School to paint a bright new playground, sponsored by Target, in partnership with the Zilber Family Foundation. The effort was part of Target’s commitment to serve 7,200 volunteer hours in Lindsay Heights as part of its Milwaukee Matters Initiative.

“Target was looking for a community to focus on, and wanted to be part of a larger effort on a long-term basis,” said Susan Lloyd, executive director of the Zilber Family Foundation, during the schoolyard makeover.

Grants totaling $2.5 million of the retailer’s $5 million initiative were given to schools “across the nation whose students have high levels of poverty – and have also shown significant academic improvement,” according to Tony Tagliavia, MPS media manager.

The schools that get the most votes on the Give with Target Facebook page will receive the remaining $2.5 million. For every 25 votes a school receives by Sept. 8, it will get a $25 Target gift card, with the potential to earn up to $10,000 in gift cards, according to Tagliavia.

As of Aug. 17, Milwaukee German Immersion School had 431 votes, the highest among schools in Milwaukee. Milwaukee’s Ronald Reagan College Preparatory High School, Fernwood Montessori School and Honey Creek Continuous Progress School were also in the top 10, according to Tagliavia.

The Give with Target campaign is part of the retailer’s commitment to donate $1 billion for education by 2015.