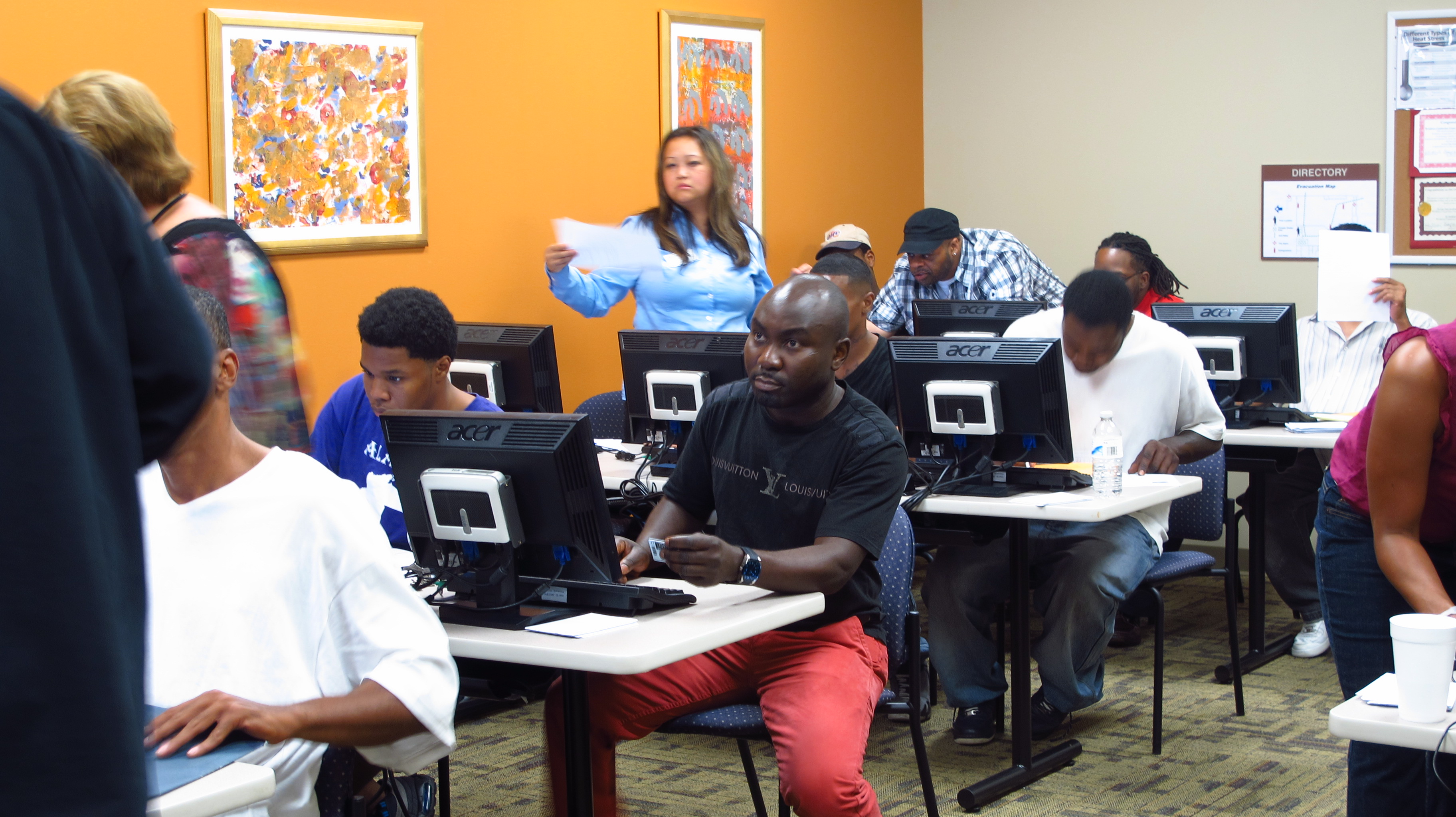 Individuals whose licenses have been suspended or revoked look up their transportation-related fines. (Photo by Monique Collins)

Workforce experts say that the lack of a valid driver’s license is one of the biggest barriers to employment.

“Not only do people need their license to get to work, a lot of the time jobs require you to have a driver’s license before they’ll even consider hiring you,” said Reginald Newson, secretary of the Department of Workforce Development.

Only those who had their driver’s licenses suspended by the city of Milwaukee were eligible to participate.

The session helped attendees figure out what transportation-related fines they had on record through the Department of Transportation and the Milwaukee Municipal Court. Individuals were then able to pay 25 percent of their fines up front and then start on a repayment schedule, according to Cheryl Lightholder, manager of communications for one of Goodwill’s Workforce Connection Centers.

Individuals were also given a court date to take care of additional fines and charges.

Lightholder was one of several Goodwill employees and volunteers helping individuals with the process.

“The best part is being able to help people get jobs, so they can contribute to the community,” Lightholder said.

Added Newson, “When we help the people, they help the community, which helps the city, which is beneficial for the state. It’s all connected.”

Lightholder said the event was a success. About 350 attendees pre-registered, and about 250 were walk-ins.

While municipal court judge Derek Mosley agreed that the event was a success, he said he hopes for larger turnouts over the years.

“With events like these, not only do we knock down barriers to employment, but we also get these Milwaukee residents into court, so we can take care of their fines,” he said. “It’s a win-win.”

Mosley said several of the participants were surprised to find out they were cleared for driver’s license reinstatement.

“Without this event, they may have never known they were eligible to reinstate their driver’s license,” Mosley said. “That’s the point of this.”

Richard McKenzie was signed up by his parole officer.

“Some people, like me, don’t know what to do.” McKenzie said. “I thought my fines were a lot higher than they turned out to be, and without this event, I wouldn’t have known at all.”

“We’ve got bills to pay, children to take care of,” he said. “This is going to make it easier for people to do those things, and still get their license back.”

The event, held at Goodwill Industries of Southeastern Wisconsin, was sponsored by the Center for Driver’s License Recovery and Employability, as well as organizations such as Wisconsin Community Services, Legal Action of Wisconsin, Milwaukee Area Technical College and the City of Milwaukee Municipal Court.

Among the center’s goals are to help low-income individuals find resources that can help them recover their driver’s licenses and increase community awareness about the barriers facing people with revoked or suspended driver’s licenses.

The center will hold another event in October. Walk-ins who were turned away can come back and get the process started to reinstate their licenses.

“We’re constantly learning,” Newson said. “We’re learning what works and what doesn’t, so we can make it better for Milwaukee residents the next time we do it.”