You are here: Home / Home / Carousel / Community Warehouse to bring jobs to north side
Share this... 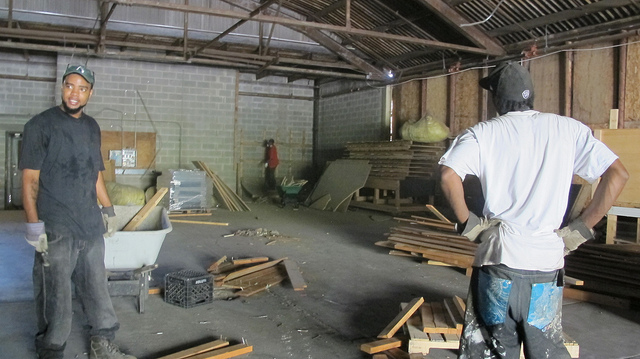 Mario Robinson (left) and other crewmembers work at the new Community Warehouse on the north side. (Photo by Kenya C. Evans)

When George Bogdanovich put a bid on the 60,000-square-foot abandoned building on 30th Street and North Avenue, the basement was flooded, the electrical wiring had been stripped and it was ransacked with litter, debris and burn spots where squatters lit fires for warmth. Now Bogdanovich, executive director of Community Warehouse, has employed men from the community to renovate the building as a second warehouse location.

“We’re basically a Home Depot with a purpose,” is how Bogdanovich described Community Warehouse, a faith-based, membership-driven home improvement warehouse that was established on the south side in 2005. The home improvement materials are sold at about 75 percent less than the retail value.

The warehouse is a nonprofit that serves impoverished communities. Bogdanovich has been employing people from the south side community for seven years, and he plans to do the same at the new location at 2233 N. 30th St.

“George is addressing the issues that have been plaguing communities like ours,” said Larry Adams, Walnut Way’s director of environmental stewardship. “The 53205 and 53206 zip codes are some of the highest (for) black male unemployment,” said Adams. “Employing men in this area is important to changing their spirit.”

Larry and Sharon Adams, founders of Walnut Way, have been patronizing the Community Warehouse since they began renovating the Walnut Way house, at 2240 N. 17th St. in 2004. 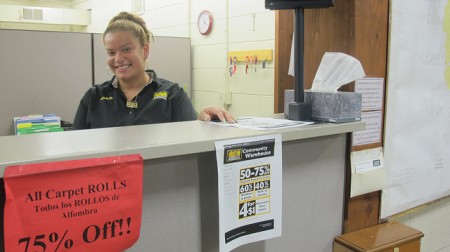 Adalis Rivera is employed at the original south side location of Community Warehouse. (Photo by Kenya C. Evans)

“He sold me a Kohler toilet worth about $200 for $25; I consider that an in-kind donation,” said Adams. “And that was the beginning of our relationship.”

The new Community Warehouse on the north side will house the Milwaukee Working project, comprising four business divisions: making pre-hung doors, building cabinets for drop-in sinks, disassembly work and a “pick, pack and ship” business – reselling donated books through a partnership with Amazon.com. The home improvement products will be sold at the south side location, 521 S. 9th St.

Unlike the original warehouse, the new location will not be a retail space. However, he plans to have a showroom advertising the products sold at the South 9th Street location. He also plans to move Community Warehouse’s corporate offices to the north side. Bogdanovich estimates that the building will be completed within 90 days.

In February, Milwaukee Working started with a staff of four men that grew to nine. The goal is to employ a total of 100 people once the business is up and running.

Larry Bell and Eric Knox were two of the first four men hired at Milwaukee Working.

“I’m here for the long run,” said Knox, who found work through an employment agency after he was released from jail on drug charges. “We were the first four, so we’re here to show (other black males) if you’re dedicated and work hard, you can make a career.”

Bell plans to stay “as long as they want me.” He added, “It’s something that’s getting to my heart: the people I work with, the mission. It’s something positive that black males need.”

Bell came to Milwaukee from Chicago with his family, and within two weeks he found a job. “That’s because I made it my goal; every day I was looking for work,” he said.

At both locations, most of the employees have a “checkered past,” and that is not by accident, according to Bogdanovich. Part of Community Warehouse’s mission is rebuilding under-resourced communities while working with “second-chance” employees. Both provide a strong foundation needed to make a better life, according to the website.

“These men have been to jail, some are felons, and some have no experience,” said Bogdanovich. “We wanted to know what kind of company we could create with low- skill labor and a place that they can call their ‘work home.’”

About two years ago the Community Warehouse’s executive board members came together to discuss how they could create more jobs while staying true to the warehouse’s mission and vision. 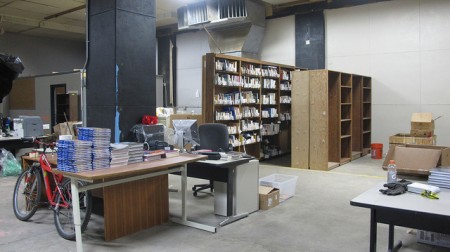 The new space is coming together. (Photo by Kenya C. Evans)

“We knew we couldn’t do much with a small retail store, and couldn’t open five more stores,” said Bogdanovich. So the board continued to meet every other Tuesday for two years to focus on a solution that would create “low skill, low barrier of entry, low capital investment” jobs, which became Milwaukee Working.

“We knew we wanted to be on the north side because we’re on the south side now, and not a lot of north side folks come here,” Bogdanovich said, adding that the north side “is where the unemployment is.”

Going on faith, the nonprofit bought the North 30th Street property sight unseen. Bogdanovich and an investor went into the pitch black, massive building with nothing more than flashlights to inspect the space. He closed on the building in early August.

Before the work crew put in new electrical wiring and plumbing, a sprinkler control system, fire doors and exit doors, they filled a dozen 30-yard dumpsters with debris from the building.

“No one has broken in since we’ve been here,” Bogdanovich said. “We work in the heart of the Latino gang community (on the south side), and we’ve never been robbed there, we’ve never been hit with graffiti,” he added.

“It’s the most rewarding experience I’ve had in a long time,” said Mike Kelly, a Community Warehouse volunteer who met Bogdanovich five years ago when he made a presentation to the Park Bank foundation. “We’ve supported them, and will continue to support them,” added Kelly, a Park Bank director who provides advice on real estate law to the organization.

Adalia Rivera, 21, who has been employed at Community Warehouse for three years, became teary-eyed when she spoke of what the job meant to her. “This has been my second home for the past three years; it’s my first and only job I’ve ever had,” she said. “We’re all family here.”

“It’s not just about saving money,” he said. “I continue to go to support the mission. He’s helping to do the work I do out here, by giving fellas a chance to be gainfully employed.”