You are here: Home / Neighborhoods / North / Amani / Food and jobs emerge from Alice’s Garden
Share this... 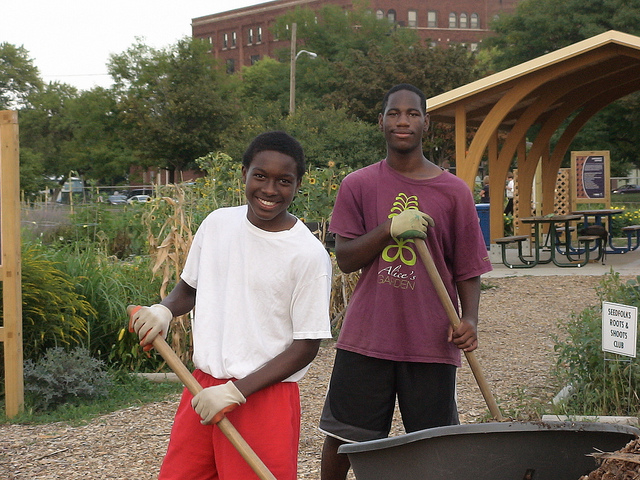 There is more than fresh food sprouting at Alice’s Garden; agricultural careers for teens are now on the menu.

As a result of a $35,000 grant from United Way of Greater Milwaukee to the Fondy Food Center, a new program called “Growing Food, Growing Jobs” will be training young people to farm and sell produce. The program is a partnership of Fondy, Alice’s Garden and Milwaukee Cooperative Extension Youth Development Program.

Somewhere between 10 and 20 acres of land will be available for the teens to farm at the Fondy Farm Project in Port Washington beginning in the spring. Until then, the teens have been farming at Alice’s Garden, and will work through mid-November or “as long as we have harvest,” according to Williams. Young Kim, Fondy Food Center’s executive director, was unavailable for comment.

Williams said she jumped at the opportunity to have more acreage available to the  teens. Two-thirds of the two acres at Alice’s Garden, at 21st Street and Garfield Avenue, are rental gardens. 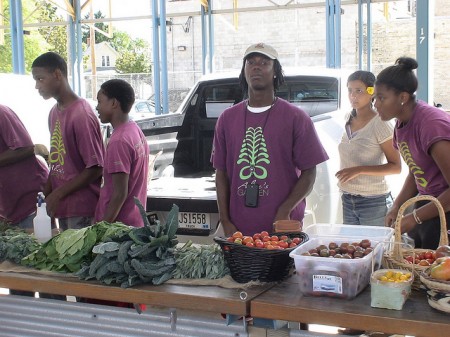 “As large as two acres may sound, it’s not a lot when you’re doing production,” said Williams.

Additionally, $9,000 of the United Way grant will partially fund the purchase of a “Veggie Van” used to transport the teens and fresh produce to and from the Port Washington farm. Alice’s Garden is responsible for raising another $9,000 for the van, according to Williams.

Six youth workers are harvesting and selling fresh produce at Fondy’s Farmers Market, 2200 W. Fond du Lac Ave., on Saturdays through Nov. 17. Some teens heard about the farming job through word of mouth, but most heard of it from the Earn and Learn program.

Amani Pettiford, one of the participants, said she likes working outside.

“I knew everywhere else I’d be sitting,” said Pettiford, 16. “I learned more than I’ve ever learned at any job, and you get to apply what you learned every day.”

The teens are taught more than just farming skills. They also learn the history of the land and the culture of African-Americans as farmers, according to Williams.

“We learned leadership skills, responsibility and how to communicate more,” said Marvenell Jackson, 14, who works at the garden with his twin brother. “We also learned the history of how the land was formed, and when Africans worked here.”

“We lived off of the land, but because of the historical context, (African-Americans) don’t always see the integrity of being a farmer,” said Williams, alluding to the history of slavery in the U.S.

The goal of Alice’s Garden, according to Williams, is to bring African-Americans “back to farming as a means to sustain households – not just a hobby.”