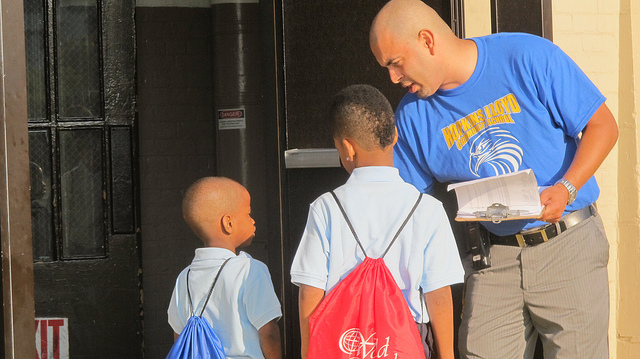 One year after a contentious merger that created Hopkins Lloyd Community School, educators at the school seem to think it is heading in the right direction.

As a community school, Hopkins Lloyd has a college-preparatory curriculum that focuses on improved learning, healthy families, and educational and cultural enrichment.

“Now we’re able to take on more kids; the opportunities for them and their families are much greater,” said Karen Schulz, a 2nd grade teacher at Hopkins for 17 years.

Schulz cited the relationship between Hopkins and Hepatha Lutheran Church, 1720 W. Locust St., as an example. “We have a great relationship with Hepatha that Lloyd didn’t (have),” Schulz pointed out.

Hepatha is a long-time Hopkins community partner that assists families with faith-based and social service needs.

“Keeping the Locust Street location was important to us,” said the church’s pastor,  Mary Martha Kannass. “So many kids have a lifeline to that school.”

Peggy Serak, a former Lloyd teacher, also is satisfied with the decision. “I was kind of skeptical, but I’m happy,” she said. 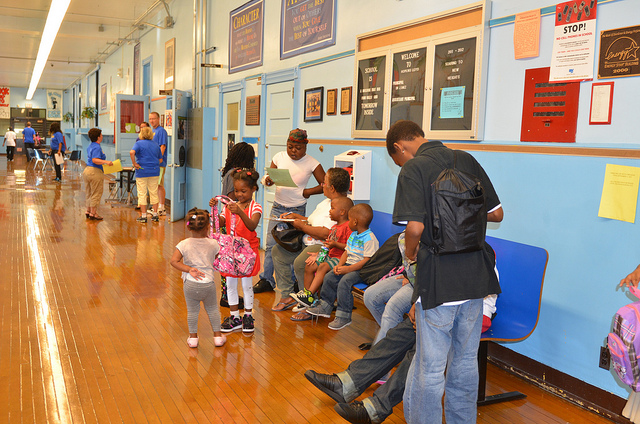 Staff, students and parents on the first day of school. (Photo by Sue Vliet)

In spring 2011, Milwaukee Public Schools proposed to close, merge or relocate more than a dozen schools due to low enrollment or poor academic performance. The original plan was to merge Lloyd Street and Hopkins Street schools at Lloyd.

After two MPS hearings at which busloads of Hopkins supporters advocated for merging the students at their school, MPS decided to do just that, taking Lloyd by surprise.

Serak said the Hopkins teachers were welcoming during the transition. Because Hopkins has grades K-8, while Lloyd was K-6, Hopkins was the better choice, she added. “I think the kids here from Lloyd are better off.”

“I’m sure there are some teachers who wish we were still at Lloyd,” Serak said. “I guess for some people it’s hard to let go.”

Adekola Adedapo, who was a paraprofessional at Lloyd when the merger was proposed, said spirits at Lloyd were down once MPS decided the schools would merge at Hopkins.

“There was low morale, but not just because of the school,” said Adedapo, who is retired. “It was because of everything going on with MPS – the uncertainty – and when you couple that with moving, you’re going to have low morale.”

The number of former Lloyd teachers at Hopkins Lloyd dwindled from 14 last year to eight this year. Some left because they were dissatisfied and others due to budget cuts. In total, Hopkins Lloyd has 25 teachers this year, including 12 from Hopkins, eight from Lloyd and five new teachers.

Tamira Green, a 7th grader who attended Lloyd, said she thought the change would be hard, but it wasn’t. “I made friends,” she said. Her parents thought the merger at Hopkins would be good because they didn’t know where to send her for middle school, according to Green.

Hopkins Lloyd has benefited from the blended resources, programs and partnerships from each school.

“More opportunities were created for kids, like swimming classes at the YMCA and trips to the Urban Ecology Center that Lloyd had been doing for years,” said Melita Pate-Tyler, a special education teacher from Hopkins.

Hopkins Lloyd Principal Juan Baez, the former Hopkins principal, said he and Lloyd Principal Tyrone Nichols worked together to create a successful merger. Baez had to reapply for the principal position, but he doesn’t know if Nichols also applied. Nichols, now principal at Cass Street Elementary School, was unavailable for comment.

“Now we can say it went very well,” said Baez, referring to the school’s first year. “There were definitely bumps in the road in trying to merge two different schools and cultures. Now we’re working together.”

Nevertheless, significantly fewer students are attending than was originally predicted. The projected enrollment for the 2011-12 school year was 588 students, but only 418 attended, according to Baez. This year, 426 students are enrolled.

The capacity at Hopkins Lloyd is 799.

“I haven’t heard much feedback, positive or negative about Hopkins Lloyd,” said Mario Hall, Walnut Way Conservation Corp.’s community engagement specialist, who was involved in the school’s transition to a community school model.

According to Hall, the school is headed in the right direction, citing partnerships with Marquette University, which has a program for middle school kids, and City Year, an Americorps program that is providing students with mentoring and tutoring.

Additionally, Hopkins Lloyd has a fulltime nurse and mental health counselor,  thanks to partnerships with Children’s Hospital and Pathfinders, respectively.

Baez said parents are starting to buy in to what the school is trying to do. “It takes time to develop and see a community school bear fruit. People want to see (results) overnight,” he added.

Academically, the school is not where it needs to be, according to Baez. “We have seen growth at every grade level, but we’re not seeing the growth we want,” he said.

“We’re better off, given the trajectory of where both schools were headed,” Baez said. “We offer more sustainable opportunities for the kids.”