You are here: Home / Home / Carousel / Little libraries have big impact in Lindsay Heights
Share this... 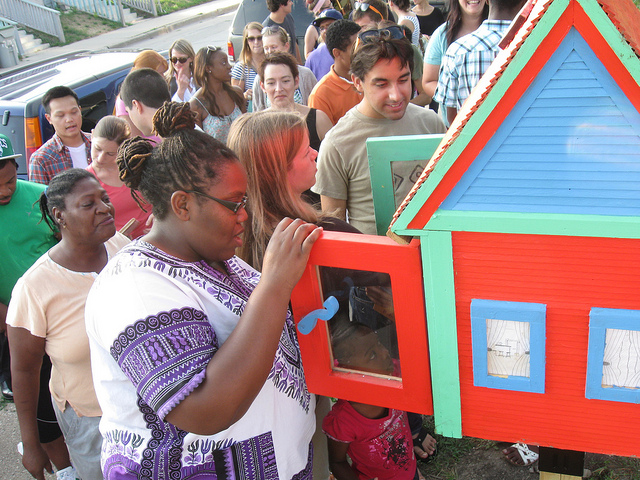 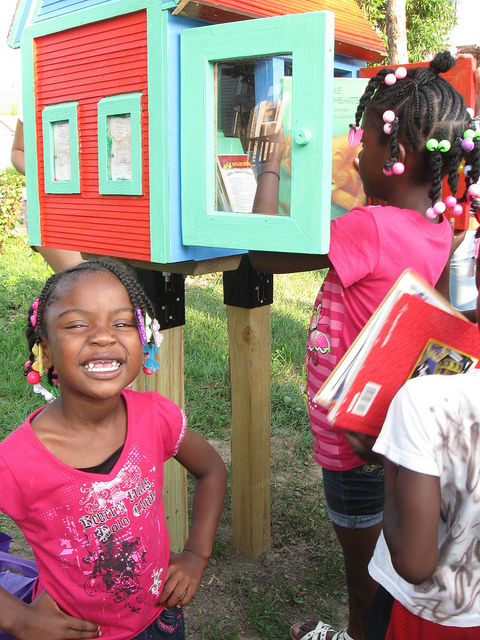 Five Little Free Libraries soon will be installed in Lindsay Heights, an area where libraries and literacy programs are scarce.

“We have two main goals: to foster a culture of reading, and create a greater sense of community,” said Jonathon Dickman, a Walnut Way Conservation Corp. volunteer who coordinated four of the five Little Free Libraries in Lindsay Heights.

The first library installation in Lindsay Heights was at Alice’s Garden in the spring. The latest was at one of Walnut Way’s gardens, on the southeast corner of N. 17th and W. Lloyd streets. Other locations include Fondy Food Market, 2200 W. Fond du Lac Ave., and Walnut Park Senior Apartments, 1551 N. 9th St.

Dickman, a University of Wisconsin-Madison TRIUMPH (training in urban medicine and public health) medical student, said he hopes the final library, at Coffee Makes You Black, 2803 N. Teutonia Ave., will be installed soon.

Sharde Jennings, Walnut Park Senior Apartments resident service coordinator, said residents “shied away” from taking advantage of the libraries initially. “They thought it was for children,” she said. “Now they’re realizing ‘this is a library for me,’ so I’d say the focus here has been to eliminate the stigma of illiteracy.”

Like all the Little Free Libraries in Lindsay Heights, the installation at Walnut Park Senior Apartments is the closest “library” in the area.

The proximity makes it much easier for residents. “Being an elderly community, they can’t get around much, and transportation is limited,” said Jennings.

Little Free Library is an international nonprofit that was founded by Todd Bol in Hudson, Wis., who built a small library as a memorial to his mother, a librarian. What started out as a sentimental project has grown exponentially into a global movement for literacy.

Pat Wyzbinski and Scott Gelzer have committed to donating 29 Little Free Libraries in Milwaukee as a tribute to their late son, who would have been 29 years old this year. The project is affectionately called Brandon’s Tool Shed.

“It helps us to channel our grief,” said Wyzbinski. Their son, Brandon Gelzer, was living with bipolar disorder, and committed suicide in 2008. “We don’t want him defined by his illness,” she added.

So far, Wyzbinski and Gelzer have built 22 libraries in Milwaukee with the help of monetary and in-kind donations. Once all 29 are built, Milwaukee Artist Resource Network (MARN), plans to create an interactive map on its website showing all the locations, along with bike routes, according to Wyzbinski.

The project has proved successful at Walnut Way. The books “flew off the shelves” after the organization’s opening celebration, according to Jessie Tobin, Lindsay Heights Neighborhood Health Alliance program manager. Walnut Way’s next step will be working to get book donations, she added.

Little Free Library users are asked to replace the borrowed book with another — on the honor system — or to return the book when they are finished with it. “Occasionally, the community needs to be reminded that you can take a book, but also leave a book,” Dickman said.

The Milwaukee Public Library has donated 29 copies of “To Kill A Mockingbird” by Harper Lee to Wyzbinski and Gelzer, one for each library. Additionally, Dickman and Jennings said they have begun talking to staff at Milwaukee library branches near Walnut Way and Walnut Park Senior Apartments about working together to support the Little Free Libraries.

Dickman said the ultimate goal is for the community to take ownership of the project. “In the end, it will be run and sustained by the community.”