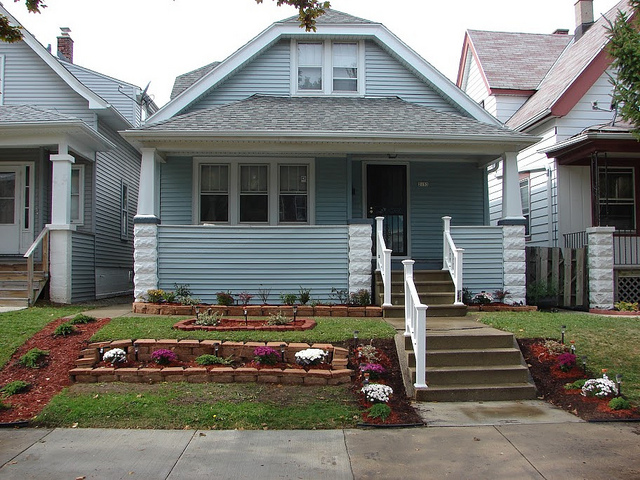 “The idea was to create a low-cost, but high-impact strategy to improve homes’ appearance and residents’ pride,” said Will Sebern, of LBWN. Last year’s Most Improved Porch Contest spurred 15 neighborhood residents to invest more than $24,000 in exterior home improvements. This summer the competition was renamed the Most Improved Home Contest.

It focused on the whole front exterior of the house, instead of just the porch. Contest winners will win cash prizes up to $1,000, and the first 20 residents to complete their projects received a $40 rebate. 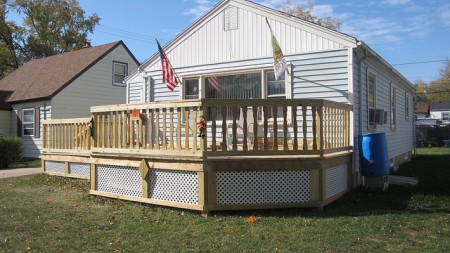 Owners renovated this home in the Thurston Woods neighborhood. (Photo by Monique Collins)

Agape also decided to open the contest up to any improvements visible from the curb in its “Belle of the Block” Home Improvement Contest,” said Tanya Fonseca, neighborhood coordinator and planner. Havenwoods dubbed its competition the “Most Improved House Front Contest.” Agape and Havenwoods also will award cash prizes to winners.

Entrants in all three communities had until Oct. 1 to finish their projects. Winners will be announced at a news conference at the City Hall Rotunda on Nov. 22.

“I told my husband that I don’t even care if we win because at least now our house is pretty,” Obdulia said.

The Venturas added a garden to their home, as well as new handrails, according to Obdulia. She said the improvements are not only great for her own home, but for the neighborhood. “Even though some of the neighbors didn’t enter the contest, they saw what we were doing, and ended up working in their own gardens,” Ventura said.

In Thurston Woods, 30 residents signed up for the contest, and 12 finished their renovations, according to Fonseca.

“It was a really great opportunity for residents because a lot of people want to make improvements to their homes, but don’t have the motivation,” she said. “The competition aspect really motivated people to get going.”

Agape and the residents worked with the University of Wisconsin-Milwaukee’s School of Architecture and Urban Planning’s Community Design Solutions program, which brings UW-Milwaukee students studying architecture together with residents to focus on the physical issues that affect the surrounding neighborhoods, according to the program’s website.

Fonseca said the residents appreciated the school’s help. “People were able to really sit down and discuss their ideas and get advice,” she said. “It was an important component because it gave residents the ability to work one-on-one with actual architects.”

Sebern said the contest has a positive impact beyond the participants.

“People really feel proud of their homes, after it’s done,” he said. “It has a ripple effect because when other neighbors see it, they want to make improvements too.”

In addition, Fonseca said, the contest has bridged gaps between neighbors. “It was a great opportunity for people to get out and socialize with other residents.”