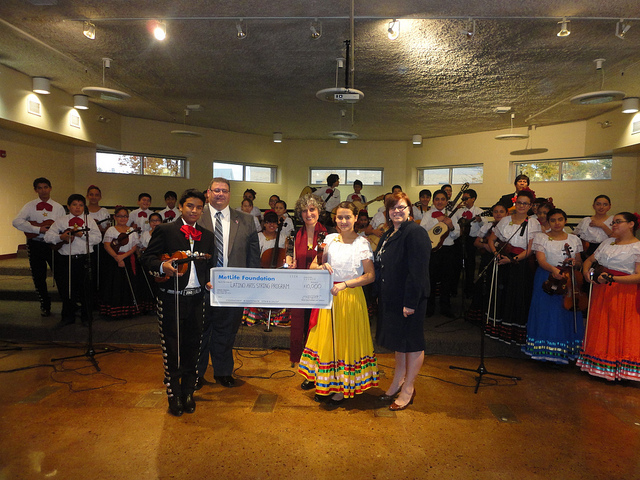 Two performers hold up the $10,000 check given to the Latino Arts Strings Program as the recipient of the Afterschool Innovator Award. (Photo courtesy of United Community Center)

The Latino Arts Strings Program is one of five recipients of the Afterschool Alliance and MetLife Foundation’s 2012 Afterschool Innovator Award.

The award aims to identify lesser-known, highly effective programs and the individuals who run them. Each of the five winners received $10,000, according to the Afterschool Alliance website.

“More than 90 percent of program participants are Hispanic youth from low-income homes, many of whom would otherwise not have an opportunity to receive serious instruction in violin, viola, cello and guitar,” said Alexis Steines, field outreach associate for the Afterschool Alliance.

The Strings Program received the award during a special “Lights on Afterschool” event, a nationwide rally that brings students, families, teachers and elected officials together to support afterschool programs.

In addition to the awards ceremony, the event included a performance by the Strings Program participants, dinner, dancing and other entertainment.

The Afterschool Alliance is a nonprofit awareness and advocacy organization working to ensure children’s access to quality afterschool programs.

The Latino Strings program was given the award for its use of the arts to strengthen self-confidence and self-expression.

“Students who have arts-rich experiences in school do better across the board academically and they also become more active and engaged citizens,” Rocco Landesman, chairman for the National Endowment for the Arts, said in a press release issued by the Afterschool Alliance.