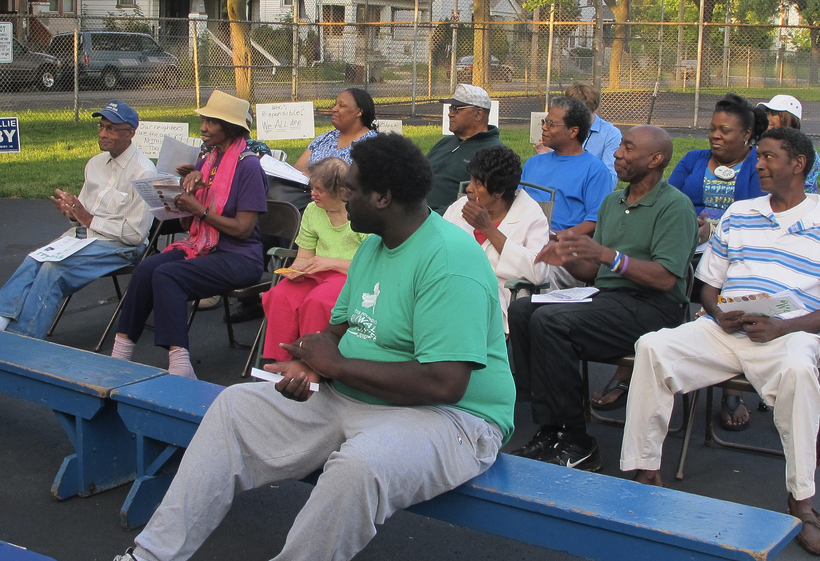 Residents respond to a speaker at a 14th Street C.A.R.E.S. meeting in Columbia Park. (Photo by Andrea Waxman)

This is the second story in an occasional series about 14th Street C.A.R.E.S., a revitalized block club in the Borchert Field neighborhood. Read the first story here.

Everyone around the Borchert Field neighborhood knows ”Mateen.“

“When I go door-to-door, and I talk to people, I find out what [they’re] looking for,” Mateen explained. She asks them about their hopes and dreams, and what has to happen to make the neighborhood better. Their answers revolve around the same theme, she said. “Everybody wants a better quality of life.”

If someone wants to enroll in a GED program, needs assistance resolving a housing problem or isn’t receiving her disability checks, Mateen tries to help. She also keeps her eyes open for peoples’ skills and whether they are open to community involvement.

One of Safe & Sound’s strategies for building community and fighting crime is to collect and distribute information about resources that are available to neighbors. Tracking down these resources can be complicated and intimidating, so organizers work to make it easier for residents to get what they need. 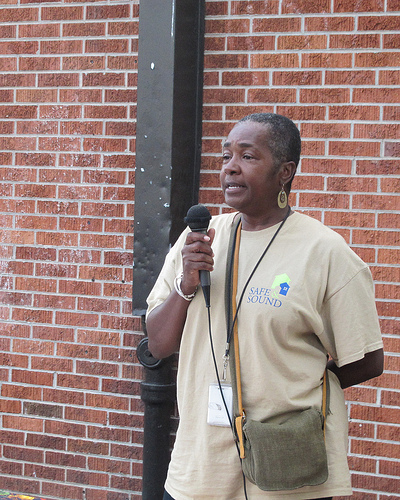 From countless conversations, Mateen knows firsthand that many central city residents want to work for change in their neighborhoods but they don’t know how to do it. According to Mateen, relationships are the first step to building safer and more positive neighborhoods.

“I’m like a person weaving together a quilt. [The neighborhood residents] are the patches and I’m the thread. I connect people and resources,” she said.

Mateen met Denise Wooten while working at a North Side community center about four years ago. Mateen then introduced Wooten to Auriea Mosley, who lives on Wooten’s block. Wooten and Mosley are now co-captains of 14th Street C.A.R.E.S.

This was the first of many connections Mateen facilitated in the 14th Street block club. Mateen emphasized the value of connecting with local police officers to improve neighborhood safety.

The relationship she promoted between the block club and Milwaukee Police Department officers Gregory Hunter and Cory Lopez has been essential to improvements on their block, according to Wooten.

It’s no secret that residents often don’t trust the police responsible for ensuring safety in their neighborhoods. Whatever the reasons, this makes it difficult for police to do their jobs.

By the time Hunter met Wooten, he had been working in the district for close to a decade. He and Lopez had recently been assigned to the Community Prosecution Unit for the neighborhood, which included Wooten’s block. He had been attending 14th Street block club meetings and knew that the residents were tired of open drug trafficking and other criminal activity on the block.

MPD’s District 5, where 14th Street C.A.R.E.S. is located, represents 11.4 percent of Milwaukee’s population, but accounts for 30.5 percent of the city’s code infractions in boarded-up buildings and 25 percent of its litter violations. District 5 also accounts for a disproportionate share of offenses such as homicide, assault, theft and burglary. 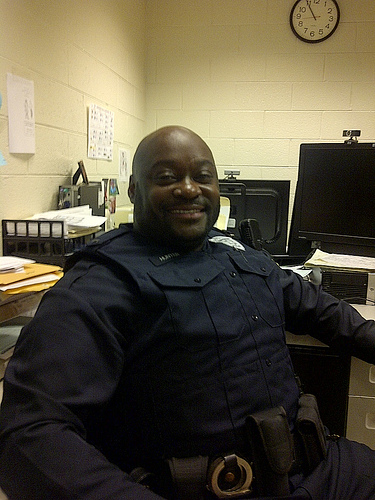 Hunter said he and his partner felt good about their new captain’s decision to expand community policing, which is very different from simply responding to calls.

Community policing involves finding, building and maintaining relationships with neighborhood residents and businesses as well as with community organizations such as Community Advocates, city departments, utilities and specialty units in the police department.

“It’s a positive way to do policing,” Hunter said. The increased direct contact with residents was a big step in the right direction. And with hard work on both sides, Hunter thinks police and residents have succeeded in building mutual trust.

“The relationships were built over time by us doing what we said we would do and taking their concerns seriously,” he said.

Hunter described 14th Street C.A.R.E.S. as a very well organized group. “They listen to the requests that we make. There are just a few block clubs or groups that understand what they understand. If there is something going on, Denise [Wooten] or one of the other block club members will call us. It’s mutual. They get it,” Hunter said. “We have a relationship that is sacred.”

Hunter has explained his department’s perspective and way of operating to residents so that they can see how to get the results they want.

“It’s very frustrating for them that they have to call over and over again,” he said. But MPD “operates on a system of dots. The dots are crimes, incidents, calls for service: burglary, robbery, auto theft. If we see a lot of dots, you’re going to get our attention.”

Eyes on the prize

Mateen made another important connection for 14th Street C.A.R.E.S. when she introduced the group to the City of Milwaukee Neighborhood Improvement Development Corporation’s David Weber.

Like Mateen, Weber had his fingers in many pies. At NIDC, besides acting as Community Outreach Liaison for the Targeted Investment Neighborhoods initiative, he directed an estimated 30 projects in the nine Healthy Neighborhoods Initiative communities, as well as 13 or 14 community improvement projects.

Passionate and unorthodox, Weber applied his skills, experience and heart to improvement projects in more than 20 central city neighborhoods. He recently left NIDC and moved to the Department of Neighborhood Services, heading up the anti-graffiti program.

Weber pointed out that neighborhood development is slow and difficult work, not only for him, but also for the neighbors who take it on as volunteers. He needed to make sure a neighborhood was up to the challenge before awarding it TIN status. 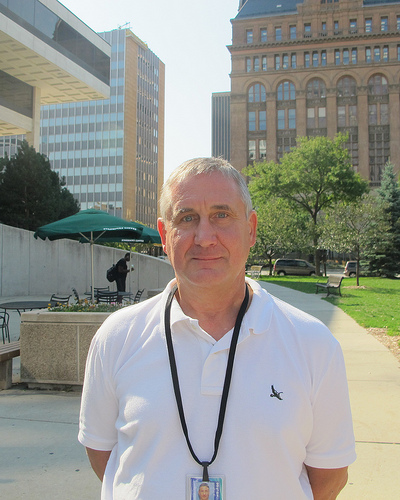 However, “It’s not just home rehab,” Weber said. “It’s neighborhood quality of life, improvements engaging the residents, making it safer, being proactive.” And there are challenges, including residents who are apprehensive about engaging with government, and the work involved in filling out loan applications and providing the required documentation.

Though Weber said he was immediately impressed with the dedication of 14th Street C.A.R.E.S., a TIN application had never before been filed by a neighborhood group that was not represented by a professional community-based organization.

In Weber’s experience, many block clubs do little beyond complaining, but 14th Street C.A.R.E.S. was different, he said.

“They had their eyes on the prize. They really, really wanted a TIN.”

When Wooten took Weber on a tour of neighborhood assets and told him about the history of Borchert Field, he was “impressed that there were a number of families that had been there for a long, long time,” he said.

“Their application was better than some community-based organizations. It was very thorough. They had maps. They had signatures. They had data,” he added.

Even TINs sponsored by community-based organizations don’t always succeed, Weber noted. “Some of them do really well and some of them don’t do anything.”

It’s difficult to say why this is true, Weber said, but he speculated that it boils down to whether participants have “passion for your neighborhood, passion for people and now, sometimes, it’s desperation to keep your neighborhood livable and your property value up.”

“Because they were new, we gave them some goals to (meet),” Weber said. First-year benchmarks for 14th Street C.A.R.E.S. included a minimum of 15 loan and grant applications, at least one community improvement project, and a couple of neighborhood walks and cleanups. The group is well on its way to reaching the benchmarks.

Like Mateen, Sixth District Ald. Milele Coggs said her most important job is providing constituents with information about resources that are available to them.

“There are city programs that can aid neighbors in [addressing] whatever issues it is that they have, but people just don’t know,” Coggs said.

A member of a well-known political family, Coggs was elected to her first term five years ago. As a longtime resident of the district, she knows her constituents and stays in regular contact with them through Facebook and other social media, e-mail and cell phone. (Her cell phone number is publicly available.)

Coggs keeps in touch with as many of the dozens of block clubs in her district as she can.

”Any new group of people that wants to start something, Mateen will call and say they’re having a meeting.” Coggs said. That’s how she came to attend a meeting of the 14th Street block club. 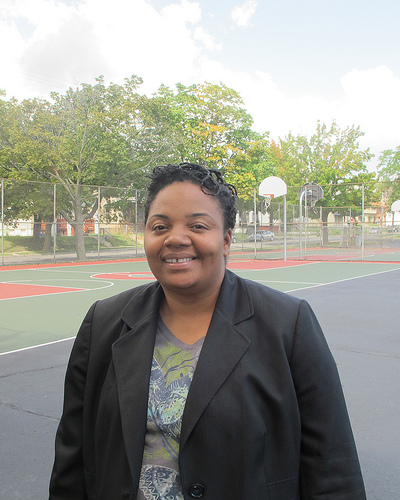 During that first encounter she could see that it would be different than most block clubs, she said.

“They were very vocal about not wanting to be a ‘doom and gloom’ block club.” And they immediately began to plan next steps. Among them: meeting with other proactive groups about how they stay positive and creating a bike club for the misbehaving kids riding bikes on the block. They asked lots of questions, Coggs said.

That attitude and the results that have followed attracted people who might not ordinarily have been interested in a block club, Coggs noted. The residents on the block get relatively quick results from the police because they work well with them. Visible activities such as events at the park and better upkeep of properties are making more neighbors invest and participate in 14th Street C.A.R.E.S., she added.

What Coggs wants most from her constituents is unity against the forces of crime and neglect.

“Block clubs are on the front lines of securing their own quality of life. Even with all that I can do and all that the police can do and all that Safe & Sound or any other organization can do, it begins with those people living there letting us know. We’re not omniscient.” Neighbors have to report what they see, Coggs said.

When residents and business owners on a block come together and work with police, elected officials and community organizers to take control of their block, criminal activity will move to another block, Coggs and others said.

She added that the movement to organize into block clubs is growing, in part because people are sharing information about good experiences they have had working together with their neighbors. Like 14th Street C.A.R.E.S., successful block clubs have not only brought increased safety, they’ve nurtured community gardens, social connections and celebrations.

One such celebration took place this summer at the northeast corner of Chambers and 14th streets. As local political leaders cut colorful streamers stretching across the blacktop to the fence surrounding the basketball court, the crowd clapped and cheered. Adults, teens and kids draped the black, red, green and yellow streamers around their shoulders, snapped photos, and milled around, smiling and greeting neighbors.

What was once an “asphalt jungle,” according to Wooten, now has grass, landscaping, park benches, a play area for small children — and a new basketball court. The second phase, planned for spring 2013, will bring a new field house, a mural by a local artist and more trees.

Wooten and Mosley expect to have more to celebrate as a result of 14th Street’s status as a TIN.

As for Mateen, she hopes that further down the road 14th Street C.A.R.E.S will “put together some workshops and show people how to be empowered.”

About Andrea Waxman and Adam Carr