You are here: Home / Home / Carousel / Black women run for their lives
Share this...

Black Girls Run, a national organization with a Milwaukee chapter, is encouraging African-American women to run in groups, both for health and for moral support.

“There’s no other way to do it besides get out there and do it,” Black Girls Run Milwaukee Ambassador Laci Coppins said about women who want to start running. “I often have women concerned about their hair. Sometimes I just ask the hard question, ‘So you’re going to choose your hair over heart disease?’”

The Milwaukee chapter is slowly growing, with a core group of 10-15 women who meet regularly every Saturday. The group has more than 300 local members on its Facebook page. Coppins said many beginning runners feel they would hold others back, so they don’t join.

“One of the goals we have this year is to increase participation, starting with the ladies on the (Facebook page),” said Coppins.

The group meets to run, but also to educate and strengthen women to become better runners. And, increasingly, they’ve started to meet for social reasons.

Eighty percent of African-American women nationwide are overweight, according to Black Girls Run. “BGR wants to create a movement to lower that percentage and subsequently, lower the number of women with chronic diseases associated with an unhealthy diet and sedentary lifestyle.” 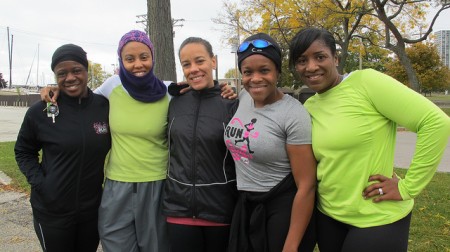 Additionally, the Centers for Disease Control and Prevention reports that one-third of Americans are obese, and African-Americans have the highest rate of obesity at about 50 percent, compared with Hispanics (39 percent) and non-Hispanic whites (34 percent). Obesity-related conditions include heart disease, stroke, Type 2 diabetes and certain types of cancer.

Black Girls Run has more than 60 running groups and approximately 25,000 members across the U.S.

The Milwaukee chapter launched in 2011 after Coppins saw a woman at the United Negro College Fund Walk/Run event with a Black Girls Run shirt on. She researched the organization, which was started by Toni Carey and Ashley Hicks in New York City in 2009, and decided to start a chapter in Milwaukee.

When Coppins, who is in her 30s, first started to run in 2005, she said she was tired of being overweight and out of breath. She lost 40 pounds, and has since continued to run regularly. She runs half-marathons, and one of her goals is to run in 50 states by the age of 50.

About two-thirds of the running group in BGR Milwaukee started because of  “doctor’s orders” to lose weight, rather than for the enjoyment of running, according to Coppins.

Despite women’s reluctance to start running, Coppins continues to encourage them to take the first step on their running journey — whether that is walking or running just one block.

“Black women do run,” said Coppins. “But stereotypes are perpetuated, and we have to re-educate people.”

It’s not so much about being black — any woman of any color can join, according to Coppins, but the group’s responsibility is to target diseases that attack the black community in higher numbers, such as diabetes and high blood pressure.

Since the Milwaukee chapter launched, it’s grown from meeting once a week to five times a week, and it now has a partnership with Fleet Feet Sports, a running store that provides education and training for runners.

“We’re like the postman: rain, snow, sleet, we’re out there,” said Coppins. “The only time we don’t meet is if there’s lightning or it’s below zero.”