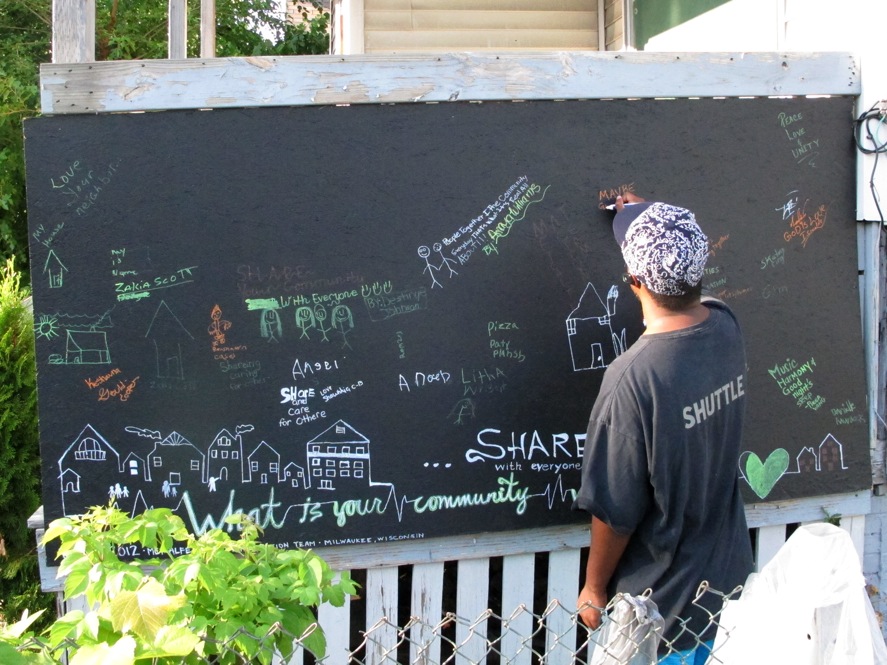 A Metcalfe Park resident shares his hopes for the neighborhood during a summer event. (Photo by Alec Brooks) 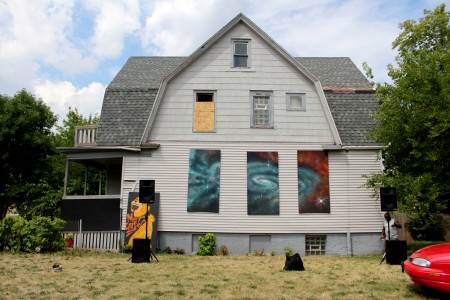 A three-panel painting by Ben Janik. (Photo by Erin Dorbin)

A small group of Milwaukee residents who came together in May to form the Metcalfe Park Community Action Team won recognition and a cash award in the Chicago-based Metropolitan Planning Council’s (MPC) contest, “Space in Between.”

The contest, in its first year, rewarded “placemaking,” the art of transforming vacant spaces into community assets. Placemaking also can serve as a temporary way to enliven a community until a permanent use is found for the naked parcel.

MPCAT, consisting of seven neighbors, combated the North Side neighborhood’s reputation as a dangerous community by hosting a peace rally, drive-in movie night and block party on a vacant lot near the site of a triple shooting in June in which three teens were shot.

The group’s creative, interactive and temporary use of the vacant space earned MCAT $500 as runner-up.

“It was the most positive press the neighborhood had gotten in I don’t remember how long,” said Dorbin.

In addition to the peace rally on June 21 and movie night on July 26, Metcalfe Park events included free food, a dance competition, family games, resources on housing and employment and a hula hoop competition. A three-panel painting of the galaxy by Ben Janik covered three broken windows on the adjacent home. More than 300 people attended the various activities.

To top it off, Metcalfe Park neighbors drew their aspirations for the neighborhood on a “vision board” that is still standing in the lot.

“They literally left their stamp on that space,” said Mandy Burrell Booth, communications director at MPC, who also participated in the judging.

“Our hope is that the people who were involved in creating (the events) stay in touch with each other and build a long-term vision for that site,” added Burrell Booth.

Demoiselle 2 Femme, a nonprofit organization in the Roseland neighborhood of Chicago, won first place for Climb, Jump, Leap & Imagine, a ropes course and playground geared to adolescent females in the neighborhood.