As residents of Lincoln Village and Baran Park walk their dogs or jog along Lincoln Avenue, they detour through Kosciuszko Park, a grassy oasis with trees and a pond in the midst of urban Milwaukee. In the park’s southwest corner are two art pillars and a decorative “Native Couple” bench, each paying tribute to the diverse ethnic history of the neighborhoods.

The art installations are the work of Urban Anthropology Inc. (UrbAn), a non-profit dedicated to celebrating cultural diversity and appealing to the creative side of Milwaukee through its program called Operation Artists, Scholars and Innovators, or OASIS.

OASIS encourages artists to invest time and money in Lincoln Village and Baran Park, known as the Park Neighborhoods. UrbAn founder and principal investigator Jill Florence Lackey said a survey of the neighborhoods in 2009 found a number of artists already living in the area.

UrbAn also has developed several beautification projects as part of OASIS, including the art installations in Kosciuszko Park.

“We began to think we could really be an art community here,” said Lackey, an anthropologist. “We ultimately came up with this idea, filling some of our empty houses and apartments with people that would be community-contributing.” 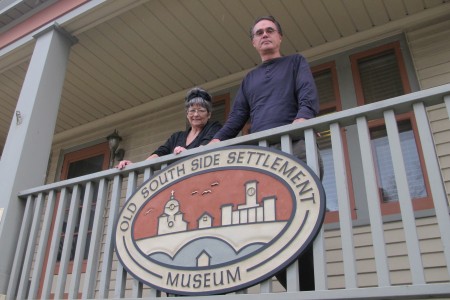 The organization has reached out to art schools in Milwaukee, and Lackey sends newsletters to the Milwaukee Artist Resource Network e-mail list.

“We don’t just want visual artists,” Petrie said. UrbAn is also looking for writers, musicians, the LGBT (lesbian, gay, bisexual, and transgender) community, and those who want to start their own businesses.

UrbAn’s most recent door-to-door survey found that many residents saw a positive change taking place where they live. Petrie said he believes that the projects UrbAn does in the area are related to the favorable reaction.

Barbara Nelson, a resident and business owner in Lincoln Village, said she appreciates everything UrbAn has done for the community.

“They’re the only organization I know who goes around and knocks on doors and talks to everybody,” Nelson said. “They try and do things to improve quality of life in the neighborhood.”

UrbAn is located on the corner of Lincoln and 7th inside the Old South Side Settlement Museum. The building was UrbAn’s first project and celebrates the cultures that have contributed to Lincoln Village. According to Lackey, more than 100 nations are represented in Lincoln Village today.

As part of its mission to educate people about Milwaukee’s diversity, UrbAn recently produced a play, The March to Kosciuszko, about the fair housing march to Kosciuszko Park in 1967. More than 200 people attended at the Basilica of St. Josaphat.

Next year, UrbAn plans to publish a photographic history book about the South Side. Lackey said the book will debut in February at the Gateway Project, an event focusing on the history of the Park Neighborhoods, where local artists will display their work.

Such events help residents feel better about their community, according to Petrie.

About Stephanie Graham and Courtney Perry