You are here: Home / Home / Carousel / Babies born ‘too small, too soon’ focus of Prematurity Awareness month
Share this... 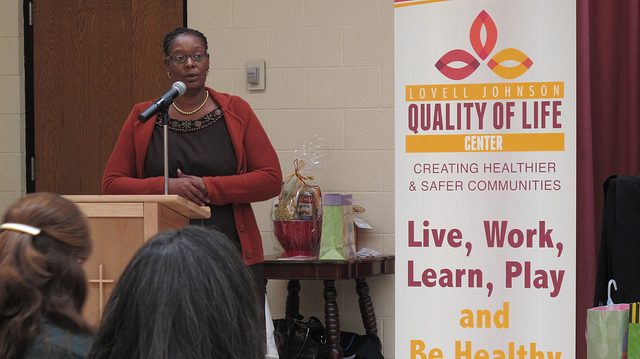 Dozens of community members recently gathered for the last of three events at St. Mark AME Church to spread awareness about the dangers of premature births.

“What we want are babies whose heads we can hold in one hand and their buns in the other and raise them up to the world,” said the Dean Magda Peck of the University of Wisconsin-Milwaukee’s Zilber School of Public Health. Peck said that some premature babies fit in one hand.

Babies born weighing less than 5.5 pounds are considered premature. These babies have an increased risk of death in their first year (infant mortality), with most deaths occurring in the first month of life, according to the 2010 Milwaukee Health Report. 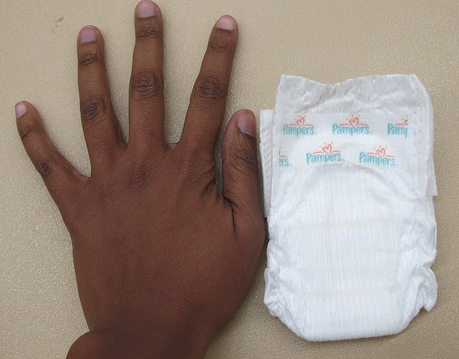 A premature baby’s diaper is smaller than an adult hand. (Photo by Kenya C. Evans)

The Lovell Johnson Quality of Life Center, which is affiliated with St. Mark AME Church, partnered with the March of Dimes, United Way of Greater Milwaukee, City of Milwaukee Health Department, Black Child Development Institute and other sponsors to educate the community about preterm births.

“We’ve been talking infant death, but we might get a new audience if we start saying that babies are being born too small, too soon,” Peck told the audience.

According to Maricha Harris, a mother who delivered both of her babies prematurely, “These doctors don’t have a sense of urgency anymore. They need to be held accountable.” Harris said she felt both of her preterm births could have been avoided if doctors were more attentive to her symptoms, such as back pains and bleeding.

However, Harris acknowledged, “the warning signs aren’t always clear.” Harris’s daughter was born at 34 weeks (full term is 37 to 41 weeks) and weighed 4 pounds, 5 ounces. Her son was born at 30 weeks and weighed 3 pounds, 6 ounces. “With both pregnancies the signs weren’t the same, and they weren’t always painful or in my stomach,” she said.

Nicole Anderson, a mother whose story is similar to Harris’s, said that women need to trust their bodies. Anderson had back pains in her first pregnancy, and decided to see her doctor. The doctor put her on bed rest for three months, but only four days later she went into labor, and gave birth to her son.

A mother whose first child is premature is likely to also deliver a second child preterm, according to Peck.

Jordan Jefferson, a father and attendee, said that educating others and getting the word out is important. “Take a lead role in getting the information. Fathers need to know what’s going on, and we as men need to teach our young men how to be fathers,” he said. 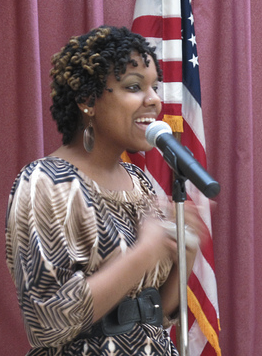 Maricha Harris said her two preterm births could have been avoided. (Photo by Kenya C. Evans)

Though decreasing the high preterm birth rate is daunting, there have been small victories along the way. Sixth District Alderwoman Milele Coggs said she sponsored an amendment to the city budget to get more home nurses in targeted areas where women need prenatal care and assistance. The amendment reallocated $100,000 from the police department to the health department’s Infant Mortality Reduction Initiative for one additional public health nurse and expanded hours for another.

The nurses work with women during pregnancy through the child’s third birthday with a few goals in mind: to improve birth outcomes, provide timely prenatal and infant health information, connect women to community resources and support, and prevent child abuse and neglect.

“While co-sleeping is the most avoidable cause of infant mortality, premature births is one of the main reasons our babies are dying,” said Coggs. She hopes to allocate funds for two additional home nurses next year.

“For every $1 put into home nurses, it comes back $2 to $6,” Coggs added. “We have to be sure that our babies have the greatest lives possible for the brightest futures possible.”