With their all-American, 1970s façades, the housing in the Amani neighborhood seems to be the perfect place to raise children. However, many of the homes contain a poison that residents are exposed to everyday without even knowing it. Lead toxins come from paint and window frames in these older houses.

The Dominican Center for Women, founded in 2005, is striving to combat lead poisoning in the home, a serious health problem in the city of Milwaukee and other urban areas.

The most important part of the program is “going into the homes and painting over the lead or replacing lead windows with new windows,” said Patricia Rogers, executive director of the center.

The Milwaukee Health Department reported that in 2010, 3.4 percent of the children tested in Milwaukee had unsafe lead levels, compared to 1.4 percent nationwide.

Some of the main sources of lead exposure are lead-based paint and leaded household dust, especially around windows, according to the health department. 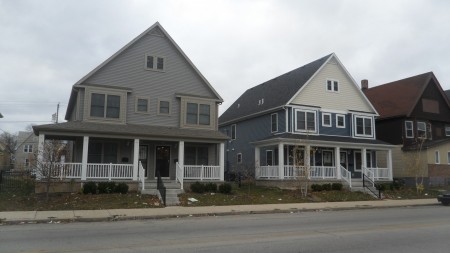 Homes in the Amani neighborhood built before 1978 are likely to contain lead-based paint. (Photo by Paulo Acuna)

A national survey conducted by the U.S. Housing and Urban Development department this year found an estimated 38 million permanently occupied housing units, or 40 percent of houses in America, contain lead-based paint that was applied before residential use of the paint was banned in 1978.

“We found out that learning disabilities in children are directly connected to lead poisoning and a lot of our families were not educated on that fact,” said Rogers.

The center devised a two-part plan for eliminating lead poisoning. The first part was to educate families about potential hazards inside their homes.

“Each month there was a target number of families to meet and educate,” Rogers said, “and also to sign up families to take lead abatement classes so that they could take care of minor things in the home.”

“The other piece of it was that we would use money from trust funds or even from our own money from donors to take care of painting, redo porches or replace windows,” Rogers said.

“Our goal is really to empower the people, and when they get educated about the lead poisoning, they can prevent their children from getting it and it’s something they’re concerned about,” said Marcia Holten, lead abatement program coordinator for the center.

Messiah Johnson, an Amani resident, said Dominican Center staff replaced his windows with new ones as part of the process of removing lead from his home.

The center’s staff is certified by the health department to remove lead.

About Paulo Acuna and Matthew Barbato