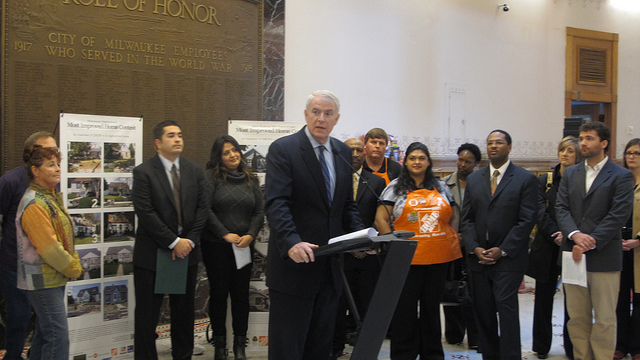 Mayor Tom Barrett comments on the teamwork neighborhood residents and organizations have shown through the contest. (Photo by Monique Collins)

Oleta Brown improved the appearance of her Thurston Woods home by installing a new roof, replacing the front sidewalk, adding lighting to the outside and carpeting her porch.

Brown took first place for the Thurston Woods neighborhood in the Most Improved Home Contest, but she said participating in the contest was about more than just winning an award.

“You’d be surprised at how big an impact (the contest) had on the neighborhood,” she said. “My neighbors saw what I was doing, and that encouraged them to make changes to their homes.”

City officials, neighborhood organizations and residents recently gathered in City Hall to celebrate the positive impact of the 2012 Most Improved Homes Contest. 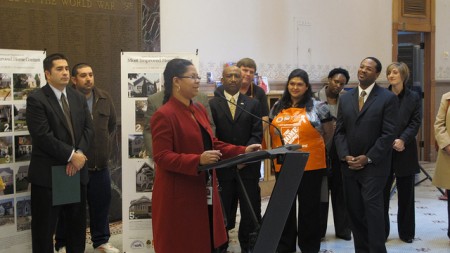 Sandra Connors, one of the contest’s winners from the Thurston Woods neighborhood, speaks at the awards ceremony at City Hall. (Photo by Monique Collins)

Fifty neighborhood residents from Thurston Woods, Layton Boulevard West and Havenwoods entered the contest, and five winners were chosen from each neighborhood.

Sponsors including BMO Harris Bank, Home Depot, Tri City National Bank, US Bank Foundation, House of Corned Beef and Direct Supply invested more than $7,000 in incentives for the contest, resulting in $164,000 worth of home renovations.

Mayor Tom Barrett commended the winners and neighborhood organizations for their work, saying it was their collaboration that makes this city great. “The real strength of our city is our neighborhoods,” he said.

Barrett said the home improvements resulting from the contest create a better place for everyone,  adding, “I want our city to be one where grandmas can sit on their front porch and watch their grandkids play outside.”

Martha Castaneda, the winner for Layton Boulevard West, said the contest brought together her entire family. Her children helped her with gardening and other home renovations.

Rose Sandrone, who took first place for Havenwoods, has lived in her home from 37 years. “It’s a great neighborhood,” she said. “People move out because they don’t want to improve it themselves,” she said.

Sandrone said she hopes that next year landlords will participate in the contest, so tenants can have better-looking homes, too.