In 2005, Ron Hegwood, a landlord and founder of RJH Properties, noticed two properties in the Havenwoods neighborhood that were being poorly maintained. The Kaul Avenue Neighborhood Development Organization (KANDO) was trying to convince the landlord to leave the area and sell the properties.

“The KANDO association was very involved in trying to oust a landlord that they felt was a bad influence on the area,” Hegwood said.

Hegwood was not then a member of KANDO, but owned 28 units in the area, some in close proximity to the poorly maintained units. After seeing the negative influence these properties had on the neighborhood, Hegwood began attending KANDO meetings, and now is the organization’s vice president.

Hegwood said landlords belonging to KANDO invest in their properties and make sure they are well maintained. The group is composed of landlords and homeowners who focus on improving safety and property values in the community. KANDO landlords also agree to keep their buildings up to code, screen residents and provide bright exterior lighting, among other commitments.

“You can try and make money short-term and not put resources back into (a building),” Hedgwood said. “At one point, these buildings were all new – they got the way they were because no one invested money into them. 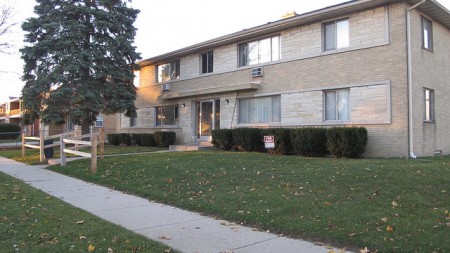 KANDO members make sure their properties are kept up. (Photo by Monique Collins)

KANDO President Mike Link said forcing out the slumlord has been the organization’s greatest accomplishment.

“KANDO spearheaded the effort (against him),” he said. “We had news crews and members of the inspection department go out there. It ultimately forced him to sell those buildings.”

Hegwood bought the buildings, which were two of the larger properties in the neighborhood, renovated them and rented them out.

Link owns 14 buildings in the neighborhood, and said he spends a lot of his time interacting with tenants.

“You can tell (the tenants) just feel a lot more comfortable and they’re impressed to have a landlord that is that active and involved in the neighborhood,” he said.

“When you have that immediate partnership, I think you see homeowners start to feel more at peace, and they think they’ve claimed their neighborhood a little more,” said Elizabeth Hammer, a community developer for the Havenwoods Economic Development Corp. who has worked with KANDO since 2003. She also works with neighborhood block watches and other landlord groups.

Hammer said she has seen increased safety in the neighborhood, as well as residents taking greater pride in the area’s appearance since KANDO was founded.

She added that poor care of their property by some landlords has created tension between homeowners and tenants, and has hurt property values. Changing how landlords think about their properties is important to community revitalization, Hammer noted.

Hammer also said a more selective approval process for prospective tenants benefits the community. “When (landlords) get a better tenant, you tend to see a more unified neighborhood, and you tend to see tenants stay longer,” she said

In addition to improving the overall appearance of the neighborhood, KANDO works to improve relationships among homeowners, landlords and tenants, Link said.

“Tenants want to stay in a comfortable place to live and homeowners want to see cooperation between themselves and the landlords,” he said.

“We serve as resources for one another,” Link said. “(We) can look out for each other and make it a little bit more of a neighborhood and a cohesive unit.”

About Christopher Chavez and Monique Collins