Two teenage boys laugh as they sprint down a hallway at the Silver Spring Neighborhood Center, then halt by the front door. A woman down the hall looks at them and they stop their antics immediately. They both know well that Lashonda Kendrick does not tolerate nonsense.

Kendrick directs teen programming at the center. Between helping students with homework, monitoring their grades and managing social development programs, it would seem as though she stretches herself too thin. But it’s all in a day’s work.

“I want to make sure that these kids have a future,” Kendrick said. “That is my main goal. I want to provide them with the tools they need to succeed.”

Although more than 1,750 teens have participated in the center’s social development programs in the past 10 years, only two participants have become pregnant and only one has gotten a felony conviction, according to the organization’s website.

Kendrick says that one reason for this success is the strong sense of community at the center.

“We get some of these kids when they are little in Silver Spring’s elementary programs,” Kendrick said with a smile. “And some of them stay all the way.” 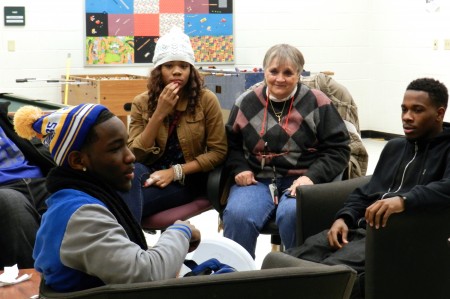 Every year, Kendrick takes students to the University of Wisconsin-Madison and to historically black colleges and universities in Georgia to show the teens that going to college is not as farfetched as it may seem.

“When we bring them to places [like Georgia], we want them to see other kids like them going to college and being successful so they can think, ‘Hey, if they can do it, why can’t I?’ We want them to see that college can be a place for them, too.”

Anthony McHenry, the center’s assistant executive director, said the programs help improve the neighborhood’s quality of life by creating future leaders who will give back to Silver Spring.

“We work hard to give them what they need to succeed,” McHenry said.

McHenry described one woman who came from a challenging neighborhood, attended the center’s programs, became president of the Teen Leadership Club, went to college at the University of Wisconsin-Milwaukee and eventually returned to Silver Spring as a teacher.

“She is one of the success stories coming out of this center – and there are so many more,” McHenry said.

According to the Wisconsin Department of Public Instruction, many inner city Milwaukee schools have very low graduation rates. Kendrick works tirelessly to ensure that her “kids” do not falter academically or slip through the cracks.

Jewel Lewis, a high school junior and participant in the Silver Spring teen programs, has met Kendrick’s standards by aiming high and applying to schools such as UW-Milwaukee and Marquette University.

“The Silver Spring Center has helped me grow as a person,” Lewis said. “It is a great program to be a part of, and I feel lucky to have it in my life.”

Kendrick said that she is proud of motivated students such as Lewis and hopes to help students set their sights beyond secondary education.

“We have so many programs here to try and keep kids busy and motivate them to make a better future for themselves,” Kendrick said. “It is really hard sometimes, but it is worth it. I want to run a program that I would want my kids to be a part of.”

Northcott a ‘home away from home’ for half a century

About David Tukesbrey and Alexandra Whittaker