You are here: Home / Home / Carousel / Northcott a ‘home away from home’ for half a century
Share this...

George Warner participated in a job training program at Northcott Neighborhood House in 2007. Shontaine Walker took part in youth programming when she was a child. Corey Collins went through the Fresh Start construction program.

All three still spend a lot of time at the 50-year-old community center in the Harambee community. Warner is now an employee; Walker volunteers at Northcott, where her children are in the youth program; and Collins is the father of a 3-year-old in the Head Start program.

“I chose Northcott because I’m comfortable with everybody here,” said Collins. “There’s nobody working in this building that I’m not comfortable with my kid being around. This is a good surrounding for him to start his first couple of years before he gets into MPS.”

Northcott’s mission is to support family stability by providing educational and recreational opportunities for community members. It offers a wide array of programs – from preschool to job training. 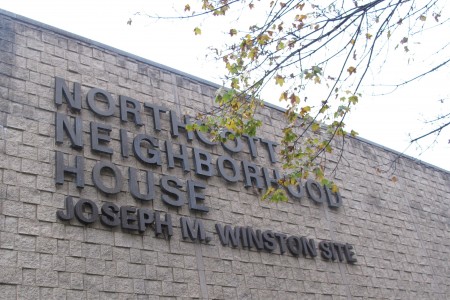 “Fifty years ago, it started out as a small community center, a Head Start center,” said Warner, who has worked as an accounting assistant at Northcott for five years. “It’s just grown from there.”

For a social service agency, Northcott has been unusually successful financially; its operating budget doubled in the past five years. Warner credits the organization’s job training programs for the funding increase. Milwaukee Builds serves adults 24 and over, and Fresh Start is an 18-month program for 18- to 24-year-olds. Nearly three-quarters of Northcott’s 200 employees work in the programs, Warner said.

The jobs programs provide temporary work for people who have been laid off, have been incarcerated or are under the supervision of the State Department of Corrections.

“People who can’t get a job, for whatever reason, we’re essentially a temp service for them,” Warner said. “We get them employment at any business that agrees to hire them after a certain (number) of months.”

Regardless of how important the jobs program is to Northcott financially, the organization’s primary focus is youth programs.

The youth program offers after school and summer sessions for nearly 3,000 pre-teens and teens at the center and at two Community Learning Centers (Keefe Avenue School and Greenfield School). Popular programs include day camps, training in science, technology, engineering and math (STEM) for middle school kids and drivers’ education for young adults.

Many children get involved in the youth program through sports. The Northcott basketball team and fully padded football team play against other community centers in city leagues. Northcott program director Robert Johnson is a former Milwaukee Bucks player.

“He’s the point man for the youth programs,” Warner said of Johnson. “He does the football, he does the basketball, and he does the drivers’ ed. He’s also a staple in the community because kids come in here and they know him.”

The youth activities keep kids coming back day after day and make Northcott a vital cog in the neighborhood’s operations.

“Northcott is a home away from home for a lot of people,” Collins said. “Me especially, I don’t leave this place. I feel like I’m here all the time.”

About Patrick Leary and Caitlin Miller