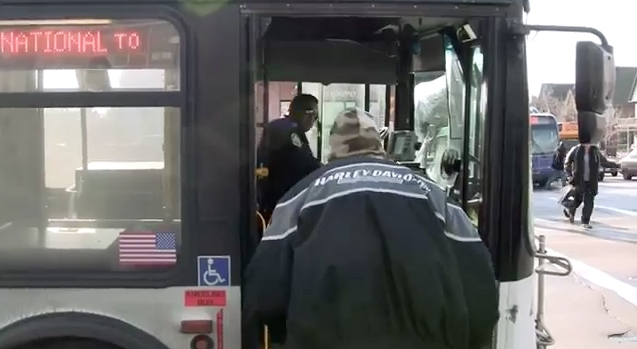 Approximately 100 people, many of whom rode the bus, recently gathered at Washington Park Senior Center to voice their concerns about dwindling state funding for the Milwaukee County Transit System.

“We need a dedicated source of funding,” said Laura Kukor-Shea, one of the bus riders who spoke at the “Community Listening Session.”

Karina Rotker, an attorney for the American Civil Liberties Union (ACLU) of Wisconsin recalled that in 1955 Rosa Parks was arrested for sitting at the front of the bus. “The transit justice struggle now is not where you can sit, but where you can work, live, go to school and get healthcare,” she said.

Transit service in Milwaukee County has been reduced by 20 percent since 2011 due to state budget cuts. According to 10th District County Supervisor David Bowen, a tax to create dedicated funding was approved by Milwaukee County voters in 2008, but the state has not allowed the county to implement it.

“In the last year’s budget, the state cut 10 percent of what is generally reserved for transit; there was about an $8 to $10 million gap because of that cut,” Bowen said.

A federal Congestion Mitigation and Air Quality grant to the county intended for capital projects has been used to keep the transit system operating, but by 2014 those funds will have run out, according to Bowen.

“We knew that if we don’t have dedicated funds for 2014, we’re going to be stuck. Cuts to funding and services of transit would be detrimental to the people who need it most,” Bowen added.

The Rev. Willie Brisco, president of Milwaukee Inner-city Congregations Allied for Hope (MICAH), said public transit and unemployment are connected. “One of our community’s biggest concerns is the extreme and unacceptable rate of joblessness in the central city, for persons of color in general and African-American men in particular. We need to make sure that the transit system can help people in our community get to jobs.”