You are here: Home / News / Arts and Recreation / More than just a bus stop, shelter ‘represents us’
Share this... 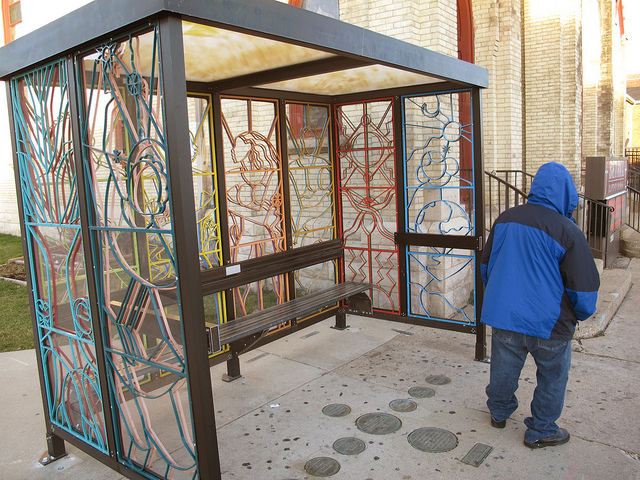 To Evelyn Patricia Terry, creator of a bus-shelter-turned-work-of-art near Lindsay Heights, the structure is valuable because public art is visually appealing and shows that people in the community care about where they live.

Ras`Ammar Nsoroma, an illustrator and muralist who rendered the drawings for the shelter at the intersection of 21st Street, Fond du Lac and North avenues, said it has additional significance: “It is one of a few non-mural, outdoor public art projects in the inner city that’s not created by a Caucasian.”

That’s why when the shelter called “Kindred Ties” suddenly seemed to disappear one day in the spring, Terry and other community members were concerned. An artist and Lindsay Heights resident, she said many people asked her, “What could have happened to it?” 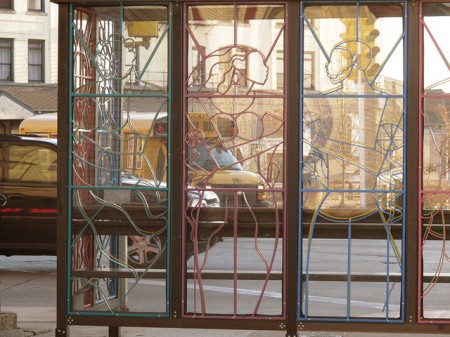 In African American communities such the greater Lindsay Heights area, there isn’t a lot of public art, Terry noted. She orchestrated the public art project six years ago, with the help of local artists, a writer, community and academic organizations, and businesses.

Terry discovered that the shelter had been parked in the Milwaukee County Transit System’s back lot on 17th Street, off of Fond du Lac Avenue. A car ran into the stop on St. Patrick’s Day, March 17, and it had to be removed because it was damaged.

Terry tracked down the missing shelter with help from Sandy Kellner, chief operating officer at Milwaukee County Transit System, and sought to have it repaired. She received funding from the Spirit of Milwaukee for the shelter frame and from Millennium Neighborhood Art Initiative—the original project sponsor—for restoration.

This fall, the shelter was reinstalled in its rightful place.

“People who pass by that bus stop are fascinated by it; transit users said to me that they were pleasantly surprised to have such a nice and different object in their neighborhood,” Terry said. “Art makes things more special and interesting, and gives things a sense of value.”

On a recent cold day, a handful of transit riders were non-committal when asked if they were glad the shelter is back. “It’s good it’s here,” said one man. Others had no comment.

Nsoroma feels much more strongly about the shelter.

“The piece is important because it is not a monument to a fallen or past hero,” adding, “It represents us — the community from babies to seniors; our culture; seeking knowledge, spirituality, love, commitment, family; and following our dreams. All this can be seen as you wait for the bus.”