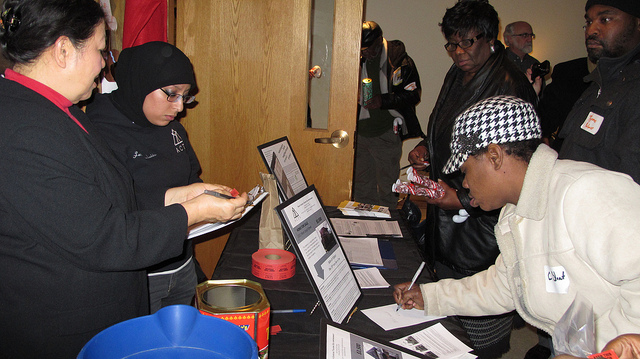 The Washington Park Partners Housing Committee used a drawing to select potential buyers for three foreclosed homes at the organization’s annual meeting. Even with the work that needs to be done, they are a real bargain.
Read More

“What usually happens in the media is that these (foreclosed and vacant) homes are portrayed as a problem,” said Carl Quindel, executive director of ACTS. “If the only way we look as it is as a problem, we’re powerless to change it.”

Quindel said ACTS Housing focuses on one house at a time, resulting in slow but promising progress for neighborhoods. “We take homes that were once a problem and turn them into an amazing opportunity,” he said.

That’s what ACTS and Washington Park Partners are doing in Washington Park. Low-income homebuyers who agree to rehabilitate the house and live in it for more than five years after closing have the opportunity to buy a house for $3,500. ACTS is a member of WPP’s Housing Committee.

Quindel said the housing project has been well received by neighborhood residents because they have a chance to own a home for less than they pay in rent.

“These renters are paying $600-$800 a month for a home that they take care of because the landlords don’t have the resources (to do it themselves),” Quindel said. “We’re giving them the opportunity to … own a home and still save hundreds of dollars.”

Wells Fargo Foundation is a major sponsor of the project, supporting it with a $155,000 grant. “It’s the main reason we’re able to do this,” said Quindel. The Wells Fargo Foundation also donated real estate and volunteers. Other sponsors are the Urban Ecology Center in Washington Park, Milwaukee Bicycle Works and Sweet Water Foundation.

“ACTS has been a perennial leader in helping families achieve homeownership in Washington Park and Milwaukee,” said Matt Melendes, a spokesperson for Washington Park Partners. The neighborhood has an unemployment rate of about 20 percent, a high poverty rate and a small number of homeowners.

ACTS Housing also works with the Layton Boulevard West and Harambee neighborhoods, offering credit, savings and finance counseling, as well as other services.

Since its founding 20 years ago, the organization has helped more than 1,600 families become homeowners. This year alone, the ACTS helped 150 families, with 100 of those families moving into previously vacant or foreclosed homes.

For its work with low-income families and housing, ACTS Housing was chosen as a finalist in the 2013 MANDI Awards. The organization was nominated for the BMO Harris Cornerstone Award, which honors organizations or programs with a long-standing commitment to a neighborhood and demonstrated effectiveness over time.

Quindel said being nominated for the award – whether the organization wins it or not – is an amazing honor.

“All the work we’ve done over the last 20 years has led up to this,” he said. “As an organization, not a lot of people know about us, so this is the beginning of a time where we can let people know about ACTS.”