You are here: Home / Home / Carousel / Urban Ecology Center goes from trailer to model for ecology education
Share this... 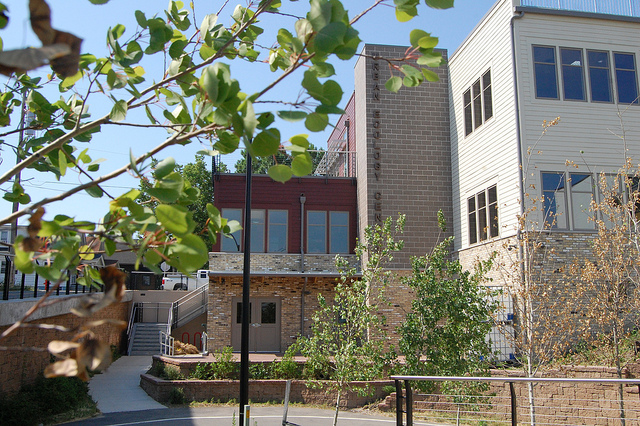 View from the back of the Urban Ecology Center’s Menomonee Valley location. (Photo by Alec Brooks)

“Save the park.” That was the single, not-so-simple goal of a very loosely organized group of concerned residents of Riverside Park in the early 1990s. Little did they know that two decades later, a trio of nationally recognized ecology education centers would grow out of their efforts.

Today, school children in three distinct neighborhoods — Riverside Park, Washington Park and Menomonee Valley — boast an Urban Ecology Center where children learn about ecology and their environment through a wide range of programs and activities, including “outdoor laboratories,” a full year of trips for students at nearby schools, after-school programs and preschool programs.

In September, the newest location, in the Menomonee Valley at 37th and Pierce streets, was named a finalist for the 2013 MANDI awards, in the State Farm Building Blocks Award category. Washington Park as a whole also is a MANDI finalist.

The site of the original UEC, Riverside Park, was designed in 1865 by Frederick Law Olmsted as the western anchor of Newberry Boulevard, with Lake Park serving as the eastern anchor. In the years since the park was created, it had fallen into disrepair. 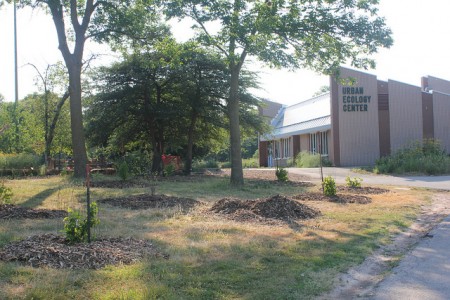 With the intent of building an MPS middle school, a square block and a half of homes to the south of the original Riverside Park were torn down, beginning in the late 1960s. That land then stood mostly vacant for decades, with the exception of occasional garden plots. Even before all the homes were demolished, though, MPS changed its plans.

By 1991, the entire expanse had become crime-ridden, including the area between what was by then a bike trail (but had earlier been railroad tracks) and the Milwaukee River. It was filled with trash and invasive plant species.

It was time to reclaim the park, but the concerned neighbors weren’t at all sure how they were going to do it. After a lot of thought, they decided to begin by cleaning it up, with the ultimate goal of using the park to teach neighborhood children about ecology and being friends of the earth. Litter and crime would be replaced with learning.

A doublewide trailer was placed just north of Park Place and east of the bike trail. MPS had built tennis courts at the southern end of the property. UEC was able to arrange a land swap, of sorts, with MPS to use the westernmost court space.

The earliest classes began in the trailer. It wasn’t until 2004 that the award-winning Riverside Park location of the Urban Ecology center opened.

Looking back, “I inherited a fair amount of angst,” said Ken Leinbach, UEC executive director since 1998. The trailer sat on MPS-owned land, while a good portion of Riverside Park was owned by Milwaukee County, making the center’s standing somewhat tenuous.

But in relatively short order, UEC worked out a preservation lease with the county for $1 per year. The center now manages the county-owned portion of the parkland with volunteers. A capital campaign followed shortly thereafter, based on the long list of schools that already had asked to have their students participate in UEC activities.

The early goal of saving Riverside Park was realized. “We essentially turned a problem into an asset,” Leinbach said. “The land was healed with volunteers, and kids were learning about their environment.”

Just as the Riverside Park location grew out of a desire to save the park, the Washington Park and Menomonee Valley sites were “natural” areas in the city that needed restoration.

According to Leinbach, in planning all three locations UEC took certain factors into account: a nearby body of water, woods and fields; proximity to schools; and some measure of wealth in the surrounding neighborhood.

“We knew we needed the neighbors’ help to sustain our program economically,” Leinbach explained.

The mission of all three UEC sites can be boiled down to “intentionally/institutionally getting kids connected to nature with adult mentors,” Leinbach said.

The founders never intended the center to be a model for anyone else. “I think you do something and it can become a model, if it works,” Leinbach said. “You don’t set out to create a model.” But it has turned into one, even internationally.

Author Richard Louv mentioned UEC in his book “Last Child in the Woods.” Leinbach recently received an e-mail from a professor in Bangladesh who read Louv’s book and wants to create a program there based on what UEC has done.

In the U.S., cities from San Diego to Syracuse and in between have consulted with UEC staff on creating similar programs in their cities.

Dennis Grzezinski, a UEC board member, describes three aspects of the center that have contributed to its success: environmental education, a community center and a nature center. The variety of programming is based on just a few primary concepts, Grzezinski said.

“Proximity of the students to the center promotes deeper relationships between the students and the educators as mentors or models,” he said. Schools that participate must be within a 2-1/2 mile radius. That makes it easier for the students to return to the center over and over and establish a connection to a natural place that has different seasons, where they can plant bushes and trees and watch them grow over time.

Grzezinski also is a man who believes in miracles. He has seen it time and again in fundraising for the center.

“Miracles continue to happen,” he said. “We just need to prepare the ground, plant the seed, and add fertilizer and water.”

One such miracle was a woman who lived near the Riverside Park site. In her will, she left a portion of her estate to UEC. Initially, her lawyer estimated $75,000 to $100,000 would come to the center. Subsequently, however, her family discovered several corporate bonds in books throughout her home, including between the carpeting and wood floor! The center received about triple the original estimate.

“This organization … comes from humble, common-sense, low-budget origins,” Grzezinski said. “We do things on a shoestring budget. Environmentalism is about using resources carefully and not wasting them.” Those humble origins made the estate gift that much more remarkable.

When Leinbach was studying environmental education in graduate school, he recalls thinking that the world is a fragile place and we humans weren’t helping.

Through the Urban Ecology center’s three locations, many humans are helping —reclaiming, rebuilding and maintaining fragile, natural places for the long term, and creating a stronger sense of community in the process.