You are here: Home / Home / Carousel / ‘Expectations high’ for Carmen’s new north side campus
Share this... 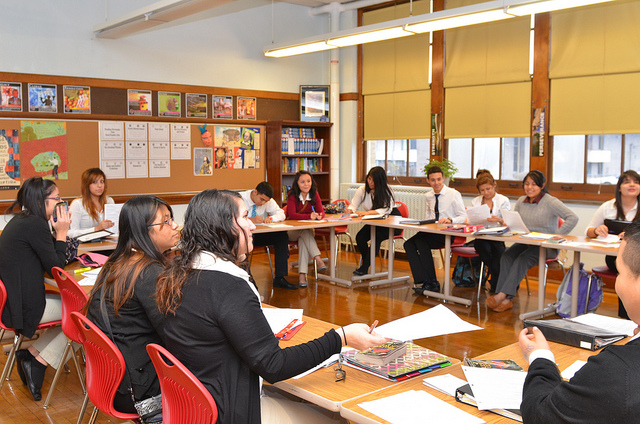 North side residents have been taking field trips to the south side to become acquainted with a charter school set to open in the Silver Spring neighborhood.

The Carmen High School of Science and Technology is preparing to open a second campus at 5496 N. 72nd St.

The middle school and high school will open this fall in a building now occupied by Northwest Secondary School, which will close at the end of the school year due to academic and behavioral concerns.

Patricia Hoben, principal of Carmen, said some students on the waiting list for the original south side campus, at 1712 S. 32nd, would become students at the new campus. But because the school — like most charters — will not provide busing, Hoben expects many students to come from the surrounding area.

As part of that effort, the school has been seeking input from future neighbors of the new campus, including representatives from the Silver Spring Neighborhood Center and the Housing Authority of the City of Milwaukee. 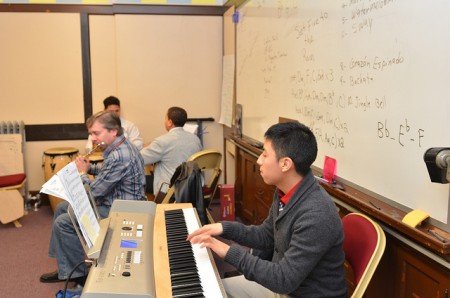 A student and teacher play a duet in a Carmen High School music class. (Photo by Sue Vliet)

Jim Bartos, executive director of the Silver Spring Neigborhood Center, said expectations are high for the new campus. The school invited him and other community members to the south side to see the existing Carmen School.

“When I visited the school, the kids are all in class, (and) they’re all engaged,” he said. “I’m not surprised they’re having such a high graduation rate.”

Students at Carmen had a 72.5 percent graduation rate in 2011, according to an MPS spokesman. This is higher than the MPS average of 62.8 percent, but lower than Wisconsin’s rate of 87 percent.

Besides showing neighborhood residents the existing campus, school representatives have attended meetings of the Westlawn Resident Council and some of Silver Spring Neighborhood Center’s community events.

Antonio Perez, secretary-executive director of the city Housing Authority, said in an email that the agency supports Hoben’s community outreach efforts. He said the school will be a part of efforts to improve educational opportunities for children in Westlawn, a public housing development now being revitalized by the city.

“Every child, regardless of their household income, deserves access to high-quality education, and based on Carmen’s track record, they will help us to achieve that goal,” the email said.

The existing charter school has been hailed for its unique approach. Most students work at an internship one day a week and students are required to take summer courses. The new campus will not have the internship requirement because of the difficulty finding enough intern positions. But it will retain Carmen’s focus on postsecondary success.

Although Carmen offers classes designed to prepare students for college and is considered a college prep school. Hoben said it aims for students to do well regardless of whether they go on to college or a job.

“If you go all one way or all the other, kids are the losers. They’re too young to be tracked one way or another,” she said. “College prep schools have not done a good job of showing kids what their options are.”

Students at the north side campus will select a “career academy,” which will let them take classes tailored to their career and academic interests, while still taking more general college-prep courses such as math, reading and science. Hoben and her curriculum board are planning the details of the academies, which will begin in 2014, when the first class of ninth graders begin 10th grade.

Unlike the south side school, the new school is large enough that it hasn’t had to turn away students. Hoben said the north side school aims to have 220 students its first year, but that enrollment is still ongoing. After four years, the school plans to have 880 students from sixth to 12th grade.