You are here: Home / News / Arts and Recreation / New Habitat for Humanity ReStore opens on south side
Share this... 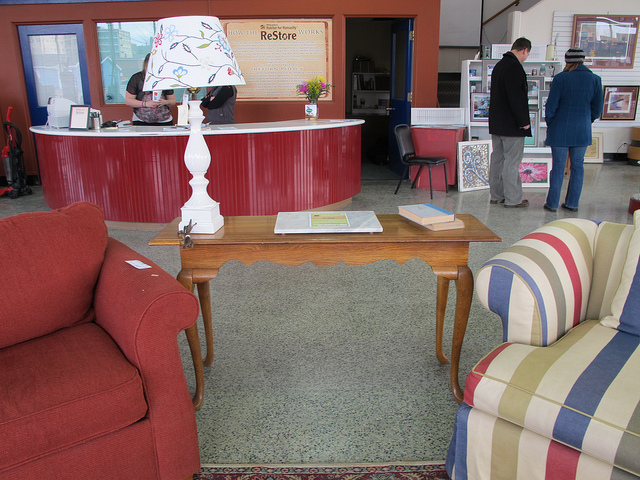 Warren McKenney entered a guitar he made with pieces of wood in the Recycled Arts contest. (Photo by Courtney Perry)

If you have a gently used end table, lava lamp or loveseat that you no longer need, ReStore will be happy to take it off your hands. A donation drive for the Habitat for Humanity ReStore will be running throughout February. The purpose of the drive, called “Stock the Store,” is to increase inventory at the new ReStore, located at 420 S. 1stSt. in Walker’s Point.

“Most of the items up for sale are from donations,” said Assistant Manager Megan Kressin. In addition to furniture, pottery and building materials also are accepted at the resale shop. Items are sold at a discount and the money raised goes to Habitat for Humanity to fund its home-building program.

Another benefit of the ReStores is that they divert discarded items from landfills and provide affordable goods to the community, Kressin said.

Artwork created from recovered materials is currently on display and available for purchase at the new ReStore location. Guitar maker Warren McKenney is displaying instruments that he created from pieces of used wood.

“I took pieces of maple, cherry and walnut and started cutting pieces in the shape of a butterfly,” McKenney said of a guitar he made to resemble a monarch butterfly. Another of his guitars is shaped like a vintage car, with an old-fashioned gas pump as the case.

McKenney entered the his work in a competition for the best artwork made entirely of materials from ReStore. Entries can be submitted to ReStore East by March 5 and the public will be invited to vote for the top three winners, who will receive a gift certificate for a ReStore shopping spree.

Kressin said Habitat for Humanity hopes to open three more ReStores, for a total of five.

“With our stores we hope to increase the support we provide to Milwaukee Habitat for Humanity so they can serve more families,” she added.