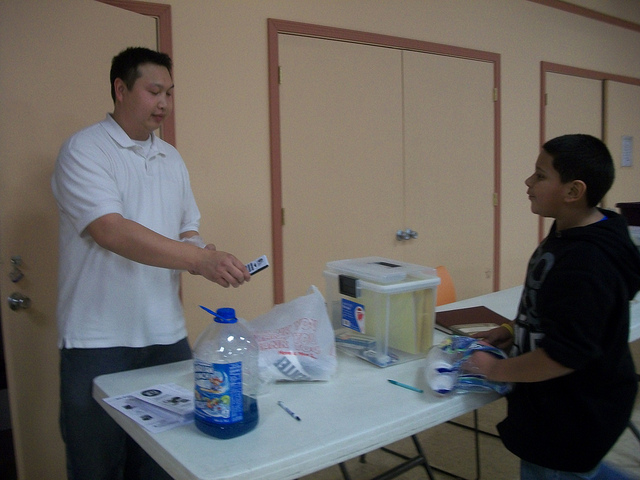 Michael Sengyothinh, the Epic Center Community Organization’s executive director, speaks with a child who is part of the after-school program. (Photo by Courtney Perry)

Growing up in Silver City, Michael Sengyothinh spent his free time walking around the neighborhood searching for activities that he could take part in. He never found them.

Programming at the center, which opened in January, includes tutoring, basketball, arts and crafts, and break dancing. ECCO is run by four volunteers, including a sports coordinator and an accountant.

“It’s a community organization that provides after-school recreational activities for youth,” said Sengyothinh, executive director of the organization. The purpose is to give young people in the neighborhood a place to learn, have fun and be in a positive space, he added.

Sengyothinh had been involved in volunteer work with youth prior to opening ECCO. “I started out at the YMCA. That was my first youth-work type of job and ever since then, I just never let go. I think it was my calling. It was something that was meant for me.”

Jonathon Jacobs, pastor of Ascension Lutheran Church and an ECCO board member, has known Sengyothinh since he was 15. Jacobs offered space in the church for the program, including a dining area and a gym.

According to Sengyothinh, if it were not for Jacobs he might still be looking for a place in Silver City to house ECCO. He wasn’t interested in locating anywhere else. “I said that I was going to come back to this neighborhood and lend a helping hand.”

ECCO, which is open four days a week during the school year, currently serves about a dozen children of different ethnicities. Attracting more participants is a top priority, Sengyothinh said.  He has passed out fliers and brochures to neighborhood families to introduce them to ECCO and its recreational programs. Eventually he hopes to keep the program open year round.

According to Daniel Adams, neighborhood plan coordinator at LBWN, the program is important to the community. During a 2011 “quality of life” planning process as part of the Zilber Neighborhood Initiative, residents noted that there were “almost no after-school weekend or summer activities in our neighborhood,” Adams said. “ECCO is a direct response to our Quality of Life Plan and what our parents, children and schools were telling us,” he added.

LBWN is working to attract other out-of -school activities. “ECCO is unique among these groups in that it is a new start-up organization and it is based here in the neighborhood.”

Ramon Candelaria, executive director of the Clarke Square Initiative, explained that CSI’s role is to  ”add value and support to groups like Mike’s…when we’re working together, we’re maximizing our resources.”

Silver City has begun to be a better place to live, according to Sengyothinh. Although he says crime will not completely go away, these days he hears less negativity about the neighborhood he grew up in.

“We’re here to be a positive influence… to gear (young people) toward the right direction and to not be influenced by the negative side of society,” he said.