You are here: Home / News / Arts and Recreation / Rising Dragon rises from the ashes
Share this...

About one year ago the Rising Dragon went up in flames. The dojo has now risen from the ashes and celebrated its grand re-opening.

Last year’s fire put the dojo’s training facility out of commission. But dedicated students still showed up, ready to train. 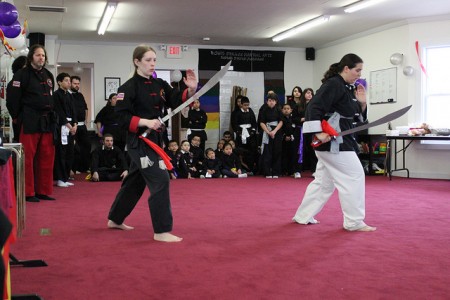 “We trained them in the garage and sprayed them down with hoses to cool down,” said Jungmann. “The small space amplified the heat,” he explained.

The Rising Dragon is now fully functional. “Our building is 33 percent bigger in terms of the training floor space. We are definitely better off now,” Jungmann said. With six highly skilled trainers and four age categories, the Rising Dragon can train the whole family from beginner to intermediate.

“I love training and martial arts because of not only the physical well being of my body but keeping my brain sharp as well,” said Andrea Pankowski, a senior student and assistant teacher at Rising Dragon. “I enjoy the family the most, the people I train with, my teacher,” she said. “They make it feel like you’re not always working out.”

Jungmann’s students have entered international competitions. “Many of our students from this humble little school actually won a number of gold medals in full contact fighting, sparring, forms and weapons,” Jungmann said. “We were very pleased.”

In the 2010 and 2011 Pai-Lum state tournaments, Pankowski took home the gold in Tai Chi adult forms.

“Somebody did mean this for evil,” Jungmann noted, “but God used it for good and we are very pleased that he’s given us such loyal students.”