“Poetry is my poison of choice,” read Marina Johnson, a junior at Milwaukee School of Languages, to snaps and cheers from the crowd at the Wisconsin Teen Poetry Slam 2013 Indie Finals. The audience filled the Milwaukee Youth Art Center to capacity, supporting Johnson and the 24 others teenagers competing for six spots on Wisconsin’s Brave New Voices slam team.

Presented by the Still Waters Collective, the Wisconsin Teen Poetry Slam Indie Finals are the culmination of a year’s worth of writing and practicing for the teens. Alex Appleton, Adrian Conner, Jonnie Dixon, Alea McHatten, Mikey Murry and Denzel Taylor won the competition.

“They put a lot of work into it, especially the kids that make it this far,” said Dasha Kelly, Still Waters Collective founder and director. “When I say they’re putting in time, they have notebooks and notebooks full of poems.” 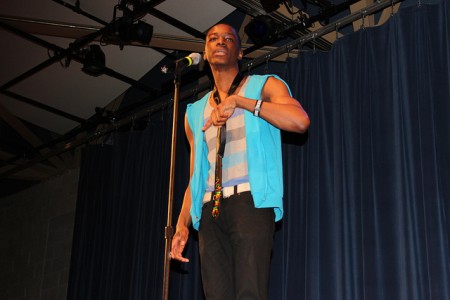 Jonnie Dixon was one of six poetry slam winners. (Photo by LouRawls Burnett)

Both competitions focus on building community among young people, according to Kelly. “Yes, they write poems, they get to take trips, but the things that happened between them and inside them are what’s really important,” she said.

Johnson said she joined the new slam team at MSL last year because it offered a welcoming community within her small school. This year, she became captain and really “forced [herself] to get out there,” she said.

Johnson, known as the political poet on her team of seven dedicated members, said slam is important because it changes people’s lives. “Everyone should be attending.”

Slam poetry also has influenced Jimmy Green, a senior at Washington High School of Information Technology. This is his second year as captain of his high school slam team, and was his first year competing in the indie finals.

Green said he has been writing poetry since he was 9 years old, when he wrote about two boys who were found drowned in a lagoon at McGovern Park. He performed that poem in a Fourth of July talent show, and won $100. “Ever since then, I’ve been writing poetry,” said Green.

He does not plan to stop writing anytime soon. Green said he recently got a tattoo of a microphone on his right arm, and he plans to major in creative writing in college.

Washington has an eight-person team this year, and the members meet after school every Monday through Thursday.

The performances at the indie finals covered topics affecting teen communities: violence, sexuality, growing up, death, and relationships, among many others. One biracial poet wrote a letter to “the entirely white version” of himself. Another poet spoke against stereotypes of Muslims. The audience gave high-energy standing ovations, and the performers hugged one another after almost every piece, sometimes crying.

At the indie finals, Green performed a piece called “My Cousin,” about challenges young people face in the inner city. He said slam poetry can be healing. “There are things a lot of teens go through that cause a lot of stress and depression. You can write a poem about these situations, and by performing you can learn to cope and deal,” said Green.

Kelly said that audiences are amazed with the performances: “one, the talent; two, the degree of insight that [the performers] have on their own experiences and what’s happening in the world about them; and three, just what’s possible,” Kelly said.