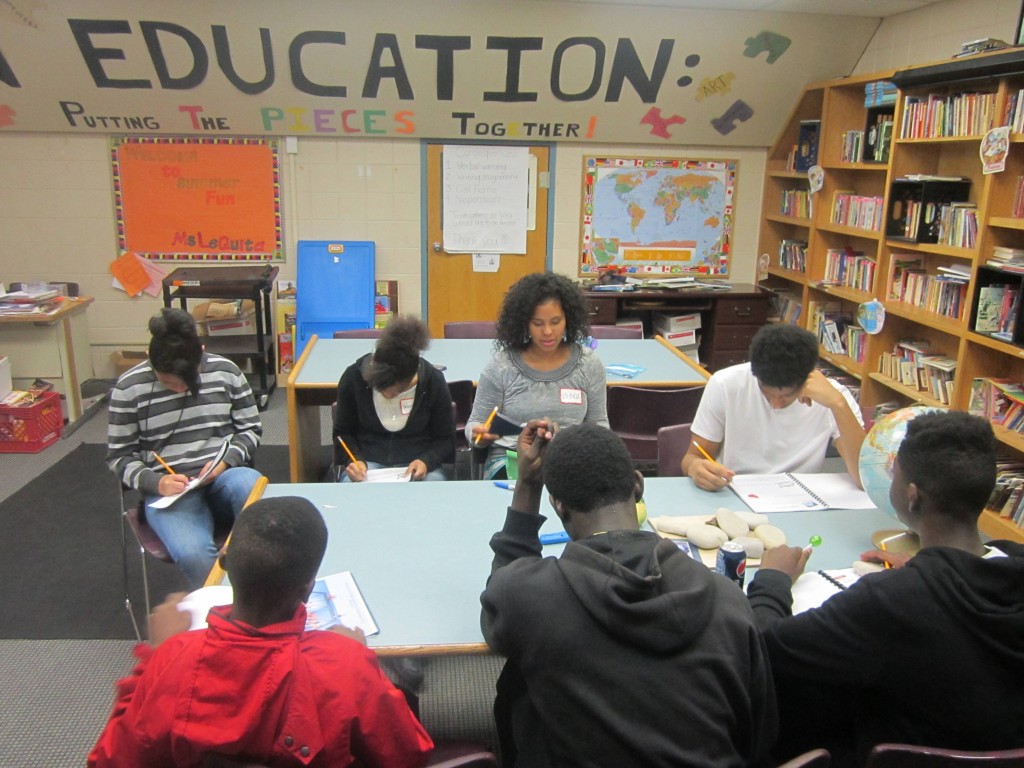 More than two dozen Boys and Girls Club members attended a retreat to introduce them to Ripple Effect. (Photo courtesy of Ripple Effect)

Teenagers recently began participating in a program that teaches leadership, community involvement and conflict resolution at five Boys and Girls Clubs in the city.

The program, called Ripple Effect Milwaukee, is partially funded by a $740,000 grant from the Violence Prevention Initiative of the Medical College of Wisconsin.

Funding for Ripple Effect was announced in March 2012.

Jamaal Smith, assistant coordinator of the Violence Prevention Initiative at the Boys and Girls Clubs of Greater Milwaukee, said Ripple Effect aligns well with the clubs’ goals of teaching leadership skills to kids and bolstering their self-esteem.

“The biggest thing is civic responsibility and self-esteem,” Smith said. “We’re trying to build confidence for kids to step out and be leaders.”

“We take that seed and plant it in those kids, the age group we work with first, which is 14 to 17,” he added. “The objective is once we train them, they train younger kids.”

The 45-minute lessons are intentionally interactive, said Patrick Kennelly, associate director of the Marquette Center for Peacemaking. They begin with an icebreaker and afterward, time is set aside for students to reflect on the session.

Five of the Boys and Girls Clubs in Milwaukee host the sessions: LaVarnway, Ryan, Fitzsimonds, Davis and North Division. Kennelly said he hopes 200 students will participate in the program this year. The sites have been deliberately spread out in the hope that students will share what they learn with friends from nearby schools.

The Violence Prevention Initiative selected the Boys and Girls Clubs of Greater Milwaukee because the organization has demonstrated that it could work well with other agencies and with a variety of age groups, said Staci Young, a professor at the Medical College of Wisconsin who works with Ripple Effect Milwaukee. Partnering with existing agencies is important to the initiative, Young said, because the college wants to build on the experience of established groups and avoid duplicating efforts.

The Marquette University Center for Peacemaking, Milwaukee Public Theatre and other non-profit agencies also are part of a coalition involved in Ripple Effect.

Funds for the program were disbursed in July. Until then, the staff worked to develop the program’s curriculum and get the necessary approval from the Institutional Review Board of the Medical College of Wisconsin. The review board ensures that the program’s outcomes are measurable and that students’ safety and privacy are  protected. The board gave its approval in December.

Before the official start of the program, staff ran a retreat for 27 teens on Jan. 12 and 13 to give them an idea of what the Ripple Effect sessions would be like. Casa Romero Renewal Center helped run the two days of training, which covered topics such as community involvement and leadership.

Throughout February, Boys and Girls staff members worked to secure consent from parents for the teens to participate, with the assistance of Marquette University students.

According to the Center for Peacemaking, research about similar programs in Chicago and Milwaukee Public Schools shows students in the programs felt safer and were disciplined less often than other students. The research includes both subjective surveys, such as students’ perception of school safety, and objective measures, such as the number of student suspensions. Kennelly said the center plans to collect similar data at the Boys and Girls Clubs.

The Violence Prevention Initiative has funded three other collaborative projects since it began in 2010.