You are here: Home / News / Arts and Recreation / Journey House to share new football field with Marquette U High School
Share this... 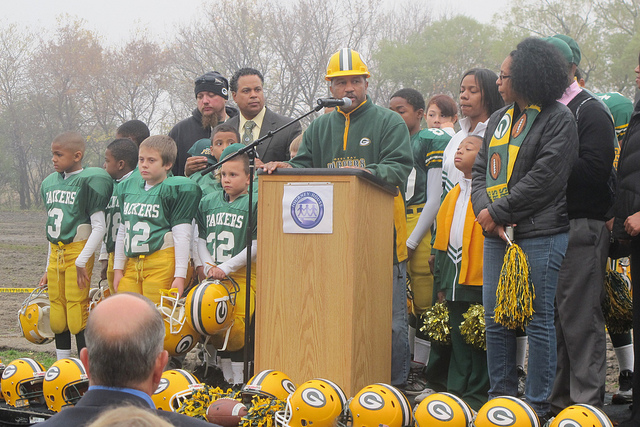 Journey House has signed an agreement to share its new football field with football and lacrosse teams from Marquette University High School. The field, located at Mitchell Park, was donated to Journey House by the Green Bay Packers.

“Some of our students do service (learning) over at Journey House and so there was somewhat of a natural partnership. Everything fell into place,” said Robert J. Herman, athletic director at Marquette University High School, 3401 W. Wisconsin Ave. 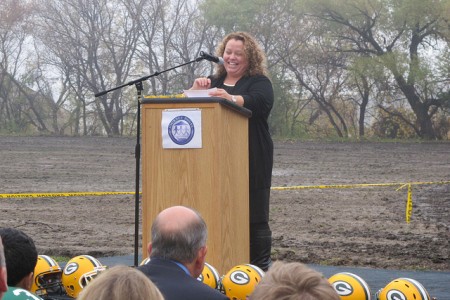 Dr. Michele Bria, CEO of Journey House, addresses the crowd during a groundbreaking ceremony for the new football field at Mitchell Park. (Photo by Edgar Mendez)

Charles Brown, youth program director at Journey House, said the nonprofit’s relationship with the Green Bay Packers came about as a result of halftime youth football games at Lambeau Field during Packers’ preseason games.  The Packers donated the field in 2009, and it was kept in a storage facility until last December.

Brown said that the idea to invite the high school to use the field came from Mayor Tom Barrett when the two were discussing Journey House projects, including installation of the football field at the former Ray Nitschke Field in Mitchell Park.

According to Brown, the mayor suggested connecting with Marquette High School because the fields the school was playing on are inadequate for their needs.

Brown said that Marquette’s service-learning work at Journey House is likely to expand. “That relationship will probably get to be better as they get to know us and we get to know them.”

They have worked out a schedule so that their games and practices will not interfere with one another.

“Obviously they (Journey House) get first priority, top priority, but their schedule in a lot of ways conveniently works with ours,” Herman noted.

During football season Journey House plays games on Saturdays and practices during the week at 6 p.m. Marquette High School does not play games on the weekend and finishes its practices in the early afternoon. Brown called the schedule a “pretty good fit.”

A grand opening celebration for the Journey House Field will be held on June 26.