You are here: Home / Home / Carousel / Clock Shadow Building developer ‘wouldn’t do it any other way’
Share this...

Before Mayor Tom Barrett gave his annual State of the City address in February, developer and entrepreneur Juli Kaufmann and seven other community leaders were invited to take the stage and speak to the hundreds of people in attendance about their contributions to the city.

Kaufmann, who has been a community developer since 2005, highlighted her work with Fund Milwaukee, an investment group that funds local businesses.

“These are the makers of our city: The local small businesses that invest in creating jobs, helping care for the environment and investing back in our community,” she told the audience. “We’re not asking, ‘What can the city do for us?’ We’re turning around and making this our Milwaukee.”

During his address, Barrett showed gratitude to Kaufmann and Fund Milwaukee for their efforts.

“What they are doing is giving back to our city and our people,” Barrett said. “Juli, thank you.”

Kaufmann’s work with Fund Milwaukee resulted last year in the development of the Clock Shadow Building, 130 W. Bruce St. in the Historic Walker’s Point neighborhood. Kaufmann said the four-story, $7 million commercial building houses tenants who subscribe to what she called a triple bottom line of environmental, social and cultural returns, in addition to financial returns. She said in an interview that her experience transforming a dreary brownfield into an example of economic development is “amazing, but it’s truly exhausting.” 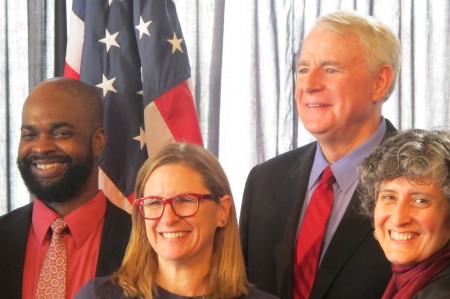 It’s not surprising that Kaufmann is exhausted. The 44-year-old Milwaukee native is the founder of her own business, Fix Development; serves on the mayor’s Green Team and the RadioMilwaukee board of directors; and is working to start a city bike share program.

In March, the Clock Shadow Building won the State Farm Building Blocks Award at the 2013 MANDI (Milwaukee Awards for Neighborhood Development Innovation) event. The project was selected by a committee of 28 private, public and government volunteers.

Martha Davis Kipcak said she owes the establishment of her business, Martha’s Pimento Cheese, to the Clock Shadow Creamery, one of the businesses in the Clock Shadow Building. She said shared values between the two companies made for a logical partnership.

“I love the integration of the building with the people and the mission,” Kipcak said. “It’s really awesome.”

Kaufmann never planned to return to Milwaukee after graduating from the University of Michigan in 1991 and the Harvard Business School in 1994, as she took a job in Minnesota when she completed school. However, after that job was eliminated, she came back home to work in the nonprofit sector and realized the opportunities here.

“What I like about Milwaukee is I can have significant impact,” Kaufmann said. “I love Brooklyn and New York City but you’re one of eight gazillion there and here you just get a lot done.”

Kaufmann said she loves the life she leads.

“Once I started my own business, I just wanted to work every second of every day,” she said. “There aren’t enough hours in the day. I love everything I do at all times. I feel so happy and amazed — and it is because I’m an entrepreneur.”

About Ben Greene and Joe Kaiser