You are here: Home / Home / Carousel / North Side gets a running start on decreasing summer violence
Share this... 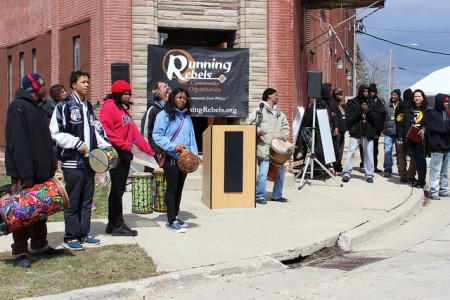 Participants get into the music at the Running Rebels anti-violence rally. (Photo By LouRawls Burnett)

As the temperature rises in Milwaukee, so does crime. Understanding this, Running Rebels held a peace rally where speakers talked about bridging the gap between the younger and older generations and decreasing violence in the community.

Music filled the air at the Running Rebels facility, 1300A W. Fond Du Lac Ave., as dozens of attendees were encouraged to choose from a variety of percussion instruments and drums to make music of love and peace.

Ice T, a rapper and star of the TV crime show “Law and Order SVU,” was expected to attend the rally, but did not show up because of “flight issues,” according to Victor Barnett, executive director of Running Rebels.

“Of course a lot of people came out to see Ice T,” said Branden Joseph, a coach and mentor at Running Rebels. “Nobody is mad he didn’t show; the message was still delivered and hopefully received the same way.” 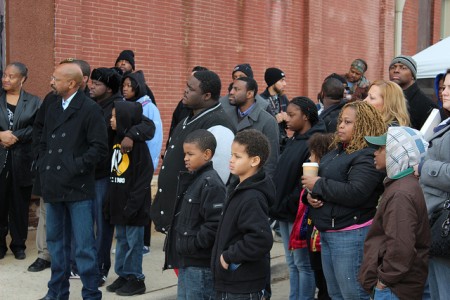 Dozens of participants from throughout the city came out to support peace on the streets. (Photo By LouRawls Burnett)

According to Barnett, the organization chose Ice T to speak “because like him, a lot of our youth that come through Running Rebels (were) in the streets, in a lot of trouble and made a transformation.” He added, “They now are doing some positive things in their lives.”

Although the weather changed from mild to windy, and at times even snow, the sun shone through the clouds briefly as the crowd sang, “more sun, more peace.”

“I am one hundred percent convinced that it is organizations like the Running Rebels, and people like Victor Barnett and all of you who work with him that are going to help us change (the culture of violence),” said Barrett.

Barnett said he is excited about “where we are in our community,” adding, “In this city we have some good things going on. We have to find a better way to communicate.”