You are here: Home / News / Arts and Recreation / Football program founder teaches kids much more than a game
Share this...

Charles Brown—a solidly built, square-jawed man—looks every bit the football coach that he is. But he doesn’t play games with young people’s lives.

“I want to make sure our kids understand how important education is,” said Brown, director of youth activities at Journey House in the Clarke Square neighborhood. “Education is going to take you out of poverty. We want to have a positive impact.”

Journey House is a community center that strives to help educate children and reduce crime and unemployment in the area. Brown, 60, fulfills this mission through its football and cheerleading program, which is designed for children from the ages of 6 to 14.

This year, Brown improved the recreational area of the community by bringing the Green Bay Packers’ practice field surface to Mitchell Park in Clarke Square. A grand opening is scheduled in June; the Journey House league will begin practicing on the field in July, with games running from August to mid-October. Marquette University High School will also play its home games on the field in the fall.

“I’m personally going to do handwritten notes to every person that was involved in getting the field,” Brown said. “Any part of the field, from the Packers side to the guys who installed it. I want to give my sincere thanks.” 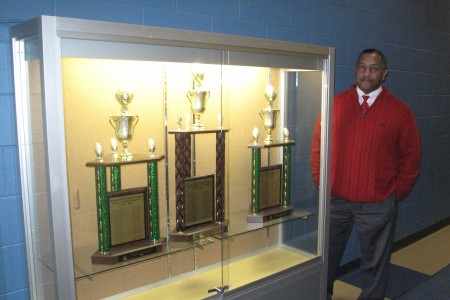 Training camp for the youth league opens in June, but players and families have begun attending informational meetings and orientation starts in May. The program focuses on more than just football. Brown and his coaching staff want to instill nine enduring life skills in their players: commitment, leadership, teamwork, sportsmanship, smart moves, goal setting, responsibility, perseverance and no excuses.

“We’re beyond just playing football games on Saturday or scoring a touchdown and winning,” Brown said. “This is really about development of our kids and community.”

Wanda Rodriguez’ son, Dominic Carter, entered the program at age 7 and played until he graduated eighth grade. Rodriguez, who is also a parent coordinator for the league, is pleased with the results.

“I see the difference we’re making in children’s lives,” she said. “Kids that conform to the structure show the biggest difference.”

Brown grew up in Baltimore and served in the Air Force for 26 years. He was an Air Force recruiter in Milwaukee for about 12 years. But Brown always wanted to teach—a perfect match with Journey House, where he started in 2003. He takes a very direct approach.

“I have a military background and I approach a lot of things from a military mindset,” Brown said. “I don’t give out ‘thank yous’ for doing your job.”

Brown may come off as intense, but truly cares for his work and wants to make a difference, Rodriguez said.  “He’s such a great person and steps up to the plate when you need him,” she said. “He’s tough in the most gentle way.”

Joel Nelson, Brown’s assistant for the program, handles day-to-day operations. He said he believes the kids respect and trust Brown.

“He knows the ins and outs of the neighborhood,” Nelson said. “He is like a father figure to the kids and they can go and ask him for advice. He has a lot of knowledge and background from the military.”

It’s Brown’s goal to improve youth recreational sports not only in his community, but also around the country. He sees programs that do not focus on helping its kids later in life, so he wants to share his approach with others. He wants his program to be a national model for others.

“I will do this job until I can’t do it anymore,” Brown said. “I want to teach kids and be hands on. I want to change the community and change the culture.”

About Jacob Born and Lauren Papucci