You are here: Home / Home / Carousel / City Hall exhibit helps others walk in the shoes of child abuse victims
Share this... 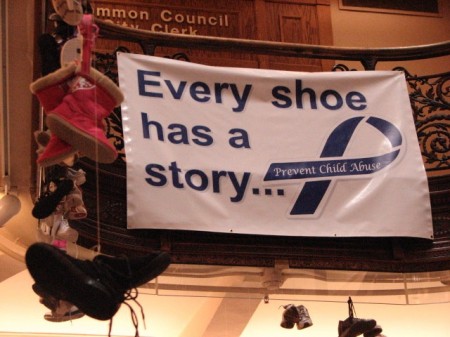 In City Hall’s rotunda, 1,068 pairs of donated children’s shoes will hang until May 1 to illustrate the number of confirmed cases of child abuse and neglect in Milwaukee County in 2011, a project created by parent ambassadors at Next Door Foundation.

Next Door Foundation, 2545 N. 29th St., is an education center in Metcalfe Park working to support Milwaukee children and families through physical, emotional and self-worth development.

All of the parent ambassadors have been affected by child abuse in some way and organized the exhibit for National Child Abuse Awareness month in April.

“The city of Milwaukee is an ally in the fight to end child abuse, but we can’t do it alone. Every community member can make a difference,” said Mayor Tom Barrett.

Barrett joined Next Door Foundation at an event called “Every Shoe Has a Story” in the rotunda, where survivors shared their testimonies and explained their inspiration for the initiative.

The display also included resource information about health and human service centers where attendees could report cases of violence.

Of the 1,068 substantiated cases of child maltreatment in 2011 in Milwaukee County, 457 involved neglect, 310 sexual abuse, 286 physical abuse and 15 emotional abuse. Many cases go unreported, according to Amanda Krzykowski, family support manager at Next Door Foundation.

“A child’s story does not have to end in tragedy,” Barrett said. “The shoes hanging in City Hall represent the journey toward healing, and show that we all have the power to help someone.”