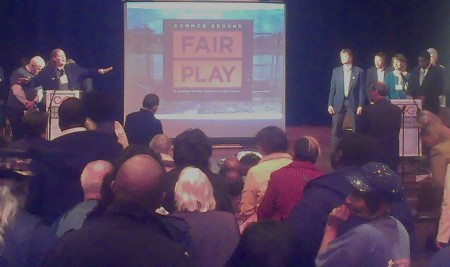 Supporters of a Milwaukee-area community organization have a message for those wishing to use public funds to build a new sports arena: “If the Bradley Center gets a full upgrade, then our kids deserve an upgrade, too.”

That’s what Jennifer O’Hear, a Milwaukee Public Schools parent, told a crowd of more than 450 at a rally sponsored by Common Ground, a community organization of citizens, small businesses and churches. At the rally, Common Ground kicked off its Fair Play campaign, an initiative that proposes using at least $150 million from any public financing plan for a new arena to upgrade athletic facilities at public schools across the county.

Parents and students shared horror stories of rundown fields and inadequate recreational facilities. “I play tennis on a cracked court and with nets that are two feet below regulation,” Beverly Jackson, a senior at Reagan High School, told the crowd. “They expect us to play on this?”

A slideshow of pictures showed a deteriorating soccer field with a large pool of mud in front of the goalpost, a tennis court with a slumped net and long crack along the court and a basketball backboard with no rim.

“The soccer field my daughter plays on is on a hill, full of lumps and holes,” O’Hear said. “We can’t allow a new arena for some guys to run around in while our kids are being injured. How can [we] tell our kids to do their best when we don’t give them the best?”

Last year, Milwaukee Bucks owner and former U.S. Sen. Herb Kohl argued for a new multipurpose arena in Milwaukee to replace the BMO Harris Bradley Center, and offered to make a personal financial commitment toward the new facility. He has not said how much he would commit.

The team reportedly told NBA Commissioner David Stern that the franchise will have a plan that includes a new arena when the team’s lease expires in 2017.

According to Common Ground, Timothy Sheehy, president of the Metropolitan Milwaukee Association of Commerce, has suggested a half-cent sales tax increase to pay for a new arena. No formal financing plan has been announced, but Common Ground members said it’s important that they be a part of the discussion.

“The new arena would be nice for the Bucks, but someone should consider the needs of the children,” Marie Byrd, a Common Ground member from Capitol Drive Lutheran Church said. “After all, the kids are the future professional athletes.”

Common Ground plans to survey athletic facilities at public schools countywide, with 144 people pledging to participate in the first survey scheduled for April 27.

For more information about Common Ground and the Fair Play campaign, visit http://www.fairplaywi.org.