Stephanie Harling leaned forward as she sat across from Dan Woodring at his desk, rapidly suggesting ways Waukee Engineering Co., a local company that supplies equipment to the heat processing industry, could engage in community development.

“We need to sustain this community,” said Harling, executive director of Havenwoods Economic Development Corp., a nonprofit agency focused on improving the quality of life in the northwest Milwaukee neighborhood.

Woodring, the company’s product and quality control agent, said he would be willing to work with the organization, possibly joining a manufacturing roundtable discussion or training young people for technical careers.

She works with residents and local businesses to improve streets such as Kaul Avenue and housing developments such as Westlawn on Havenwoods’ southern edge.

“I love Milwaukee,” Harling said. “I’m a life-long resident, so I want all of the city to thrive. I just love seeing people have opportunities in front of them.”

Harling cited her mother, Mary Jo Morris – who advocated for Milwaukee public education as a member of the PTA until her death in 2007 – as inspiration.

“That’s where I get my civic passion — by being dragged to school board meetings as a 7-year- old,” Harling said, laughing. 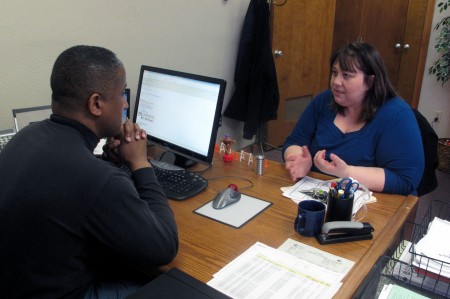 The Bay View resident found her career in economic development by accident. After earning her bachelor’s degree in corporate communications at University of Wisconsin-Milwaukee in 1991, Harling worked in sales and marketing for broadcast companies. She considered pursuing a master’s degree in elementary education, but found herself working for a nonprofit development group temporarily. That sparked a passion for community improvement.

Changing perceptions is the most difficult challenge in improving Havenwoods, Harling said.

“When I told peers that I was working in community development, they made references to ‘Gunshot Alley’ and ‘good luck,’” she said. “They were referring to what they thought was a challenging, hopeless community. What we’ve discovered is that it couldn’t be further from the truth.”

Harling organized her group’s initiatives into three categories: crime prevention and community organizing, economic development and healthy neighborhoods. Community leaders have noticed differences in the community as a result of these initiatives.

Police Capt. Jerome O’Leary, who has spent the last seven years with the 4th Police District, credited Harling and the nonprofit for helping to cause a major shift in the area.

“If you look at what the neighborhoods used to be and what they are now, they’ve really changed,” O’Leary said. “If it weren’t for Stephanie and for her group, it would not have changed.”

He added, “I love to see kids riding bikes in the spring and summertime. I smile when I think of all the work that we’ve collectively done.”

The nonprofit developed a relationship with the 4th District by involving police in community activities. For example, Harling’s group guaranteed a police presence at landlord compact meetings, which discussions that address drug and crime problems in the area. O’Leary said this made a significant difference in his job.

“You need people like Stephanie to build trust among the residents … by talking with people and also by showing that she has a strong relationship with the police,” O’Leary said.

The business community also has noticed Harling’s efforts. Woodring, for example, pointed out efforts to beautify the area.

“The new Havenwoods signage and the little things around the area makes the community great,” he said. “It shows that things are improving – that people care.”

Harling sees room for more improvement in Havenwoods. In the next five years, she can envision the Silver Spring Drive’s retail area revitalized, with more leadership and engagement from residents.

For now, Harling said she won’t rest because she’s “fallen in love” with the neighborhood.

“We have good-working, salt-of-earth people in this community,” she said, “and that’s the message we would like to get out.”

About Rob Gebelhoff and Joe Kvartunas