Jill Florence Lackey discovered her love for studying and celebrating ethnic groups in America at a young age, after the St. Paul, Minn., native moved with her family to Milwaukee. Her father was an ethnic artist and part American Indian, her mother a German Jew.

“I wouldn’t say my parents were hot on ethnicity, but my father educated me a lot on (it) and he would point out the differences” between various groups, Lackey said.

Now 69, Lackey is the founder of Urban Anthropology Inc. (UrbAn), a nonprofit that celebrates cultural research in Wisconsin and is headquartered at the Old South Side Settlement Museum in the Lincoln Village neighborhood. Earlier this year, she co-authored a photographic history book about the South Side and continues to research ethnic groups.

The book, “Milwaukee’s Old South Side: Images of America,” was published by Arcadia and features 200 photographs and graphics documenting, among other things, the city’s early Polish settlements dating back to the 1840s. Rick Petrie, who succeeded Lackey as UrbAn’s executive director when she retired, is the co-author. Lackey is now UrbAn’s principal investigator.

Petrie said the book displays the area’s rich history. “This is a book that shows that the South Side has always had a lot of different things going on in terms of arts and culture,” he said. 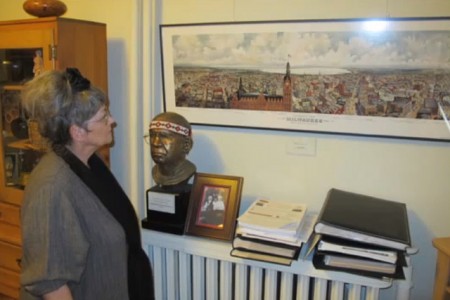 Jill Florence Lackey, founder of Urban Anthropology Inc., has been all around the country, but said Milwaukee will always be her favorite city. (Photo by Monique Collins)

Lackey founded UrbAn in 1999 to share her knowledge of cultural groups with city residents. It’s an expertise gained from seeing much change come to the community. When she moved to Lincoln Village, Lackey said, it went by names such as Kosciuszko Park, St. Josaphat and South Side Polonia. But that doesn’t mean everyone necessarily embraced their heritage, she said.

“I grew up during the melting pot era, when everyone was just trying to be American and deny ethnicity,” Lackey said. “My parents downplayed their backgrounds, as did others around me.”

Learning in school about the Laps, the Mbuti, American Indians, etc., sparked her interest and passion for understanding people from different ethnic groups.

“My teachers would make it very interesting for me,” Lackey said while looking at ethnic drawings and artifacts with visitors at the museum, at Lincoln Avenue and7th Street. “That’s why we want to work so hard at UrbAn to develop more youth programming because I think it is at that age where you get the interest or you don’t get it.” Lackey went on to earn her doctoral degree in urban cultural anthropology from the University of Wisconsin-Milwaukee.

Lackey’s commitment to her work has not gone unnoticed. Alice Kehoe, an adjunct professor of anthropology at UW-Milwaukee who serves on UrbAn’s executive board, said she doubts the South Side could have a better outlet for its cultural history.

“Dr. Lackey’s unwavering dedication to effectively helping people in lower-income neighborhoods, and her valuable oral histories and vernacular architecture, has shown others that neighborhoods and ethnic groups are interesting and vital to our city’s good health,” Kehoe said.

Barbara Nelson, a resident and business owner who has lived in Lincoln Village for 33 years, said it was Lackey’s great reputation with Milwaukee’s philanthropic foundations that helped make UrbAn what it is today. In 2009, the Greater Milwaukee Foundation awarded UrbAn its first grant as a part of the city’s Healthy Neighborhoods Initiative.

“She commits and delivers what she gets money for,” she said.

In her spare time, Lackey does free genealogy work for residents. She is also an avid traveler who says she has visited every U.S. city with a population of more than 150,000. However, lest there be any doubt which is her favorite, she said, “Milwaukee was always my choice city.”

About Monique Collins and Michael Lenoch