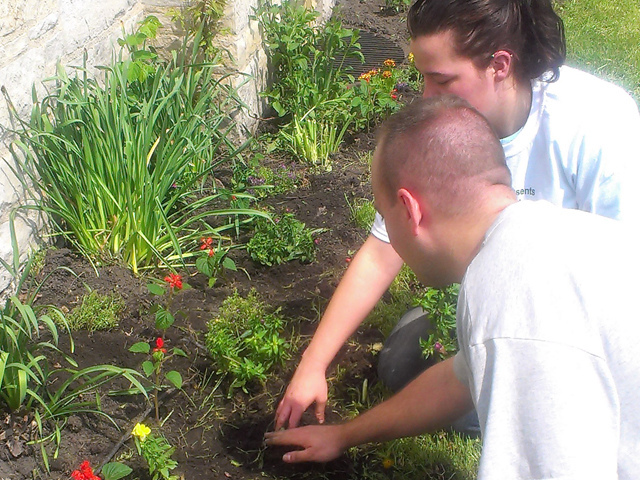 Gardeners gently tamp down the soil. (Photo by Shakara Robinson)

Volunteers equipped with garbage bags, gloves and gardening tools gathered at Walker Square Park recently to clean the neighborhood as part of the 6th annual Basura Bash. Each year the bash is held at a different South Side park.

Joe Kubisiak, director of Safe & Sound’s community program, said the idea for Basura Bash came from a similar event in another city.

Volunteers from across the city, including officers from the Milwaukee Police Department, picked up trash, removed graffiti, cut and removed brush, planted flowers and did other landscaping projects in and around Walker Square. They also marked alleys with identification numbers to reduce police and fire response times.

After picking, pulling, digging and scraping, volunteers enjoyed free food and entertainment at the park.

Kubisiak said the efforts are all related to preventing crime. 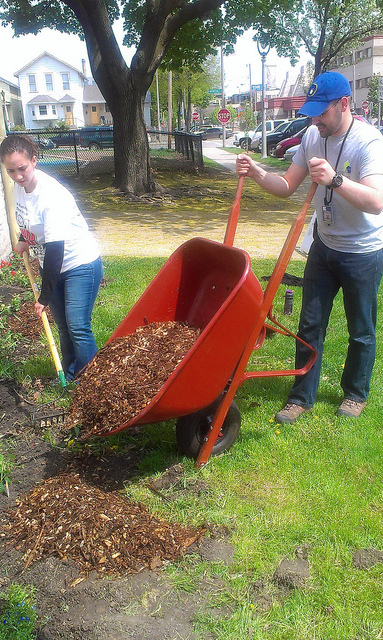 “When you have graffiti up, it sends a message. Equally, removing that graffiti sends another message,” he said. “The event brings people together to have that conversation about neighborhood safety and taking pride in their community.”

Kubisiak said during the first Basura Bash in 2008, heavy graffiti plagued the area and gang members were visible in the park.

“You don’t see that now,” he said. “I’m not saying the gang issue is obsolete, but it’s not in my face or intimidating private citizens and children who are trying to enjoy the park.”

Safe & Sound was founded in 1998 as an initiative to reduce crime in high-crime, generally low-income neighborhoods through public-private partnerships. Today, Safe & Sound operates in 21 Milwaukee neighborhoods.

Jose Perez, alderman of the 12th district, was one of the event’s sponsors. He said it was a success because of the message it sends.

“We need more events like this that clean up the neighborhood and set a standard for what our neighborhood should look like while bringing people together,” Perez said. “This event says we are paying attention and are serious about keeping our neighborhoods clean.”

Carmen Taylor, a staff member at Bryant and Stratton College, brought three volunteers from the school with her, and said she didn’t mind getting dirty for a good cause.

“We deserve it around here because there are so many people that don’t care,” Taylor said. “It’s nice to see people come together to do something to better the area.”

Both Perez and Kubisiak said that between Saturday and next year’s Basura Bash, there are several things residents can do to keep their community clean and safe.

Kubisiak added that his goal is for every block to hold a meeting and a community-building event once a year. “Come together and talk about issues, then do something visible to let people know.”