You are here: Home / Home / Carousel / The Guest House provides ‘one-stop shop for homeless’
Share this... 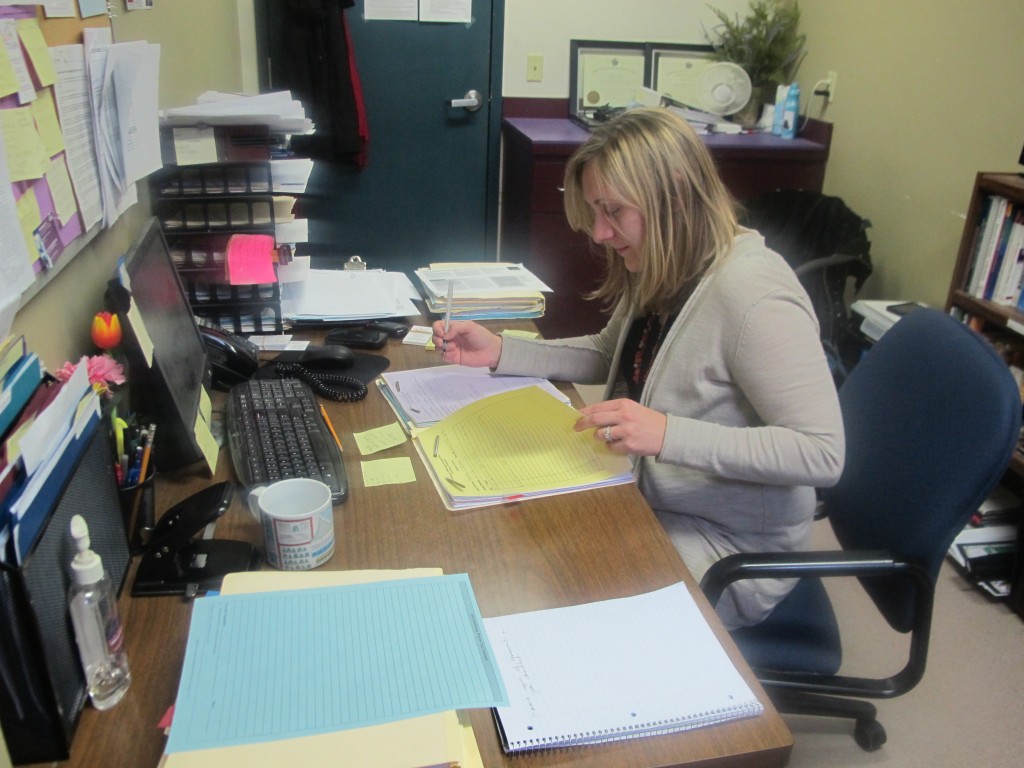 Kristen Vareka-Blez, one of three clinicians at The Guest House Counseling Clinic, works with men one-on-one to understand how substance abuse has affected their lives. (Photo by Caroline Roers)

An old, rundown brick building at 1216 N. 13th St. has tarps on the windows and a cracked sidewalk running across the front lawn. Most people who walk past don’t seem to notice it. Yet each night, 86 men call the Guest House of Milwaukee home. It is the largest publicly funded emergency shelter in Milwaukee.

Founded in 1982, the Guest House is always full and has a continual waiting list. The shelter provides beds, basic needs and at least one meal a day, donated from local restaurants and faith-based organizations. Stays in the emergency shelter are usually limited to 60 days.

Executive Director Cindy Krahenbuhl explained that the nonprofit’s multifaceted team, which includes an employment specialist and case manager, works to address all the issues that stand in the way of homeless men getting back on their feet.

“The Guest House is the only homeless shelter in Milwaukee to have a counseling clinic within its shelter. I think that is what makes us so unique,” said Kristen Vareka-Blez, counseling clinic administrator. “We really are a one-stop shop for the homeless.”

Vareka-Blez pointed out that transportation is often a stumbling block for homeless people, and they also may struggle with time management. ”Being able to just walk downstairs to both your case manager and your counselor I think really increases the impact we make and the success we have with the men.” 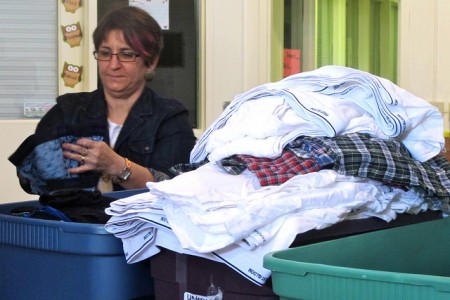 The counseling clinic is dually certified as a mental health clinic, and an outpatient and day treatment substance abuse clinic. Treatment at the clinic consists of group sessions that are usually led by the men and one-on-one counseling sessions with professionals. During the weekly individual sessions, the clinician discusses with the client how substance abuse has affected his life.

“I think we have a lot of really frank discussions with our clients about if they really want to stop and how can we help them stay sober.” Clinicians say to their clients, “I’m not going to tell you not to use, but I can tell you why some of the coping skills you are doing right now aren’t working and how you can improve,” Vareka-Blez explained.

This style of treatment, known as “motivational interviewing,” relies on the client to decide if he wants to change, rather than trying to convince him to do so.

Clinicians have had to redefine their definition of success. “When I think of success, my idea may be to stay sober for the rest of their life or not go back into that relationship,” Vareka-Blez said. However, what’s important “isn’t what we want, it is what our clients’ idea of success is.”

For instance, the Guest House Counseling Clinic had one client who remained sober for 30 days before he relapsed. This was longer then he had ever been sober in the last decade, so for him, that was a success.

“A lot of the guys have goals and want to succeed; we are just here to help them see how alcohol and drugs add to their problems and teach them how to make the right decisions in the future,” Vareka-Blez said.

The Guest House helps the men reach all their goals, including obtaining housing, health care and a job.  Staff members in all departments work together to help clients achieve these goals.

“You can think of the clients as the center part of the wheel and all the services we offer (are) moving around the client,” Vareka-Blez said.  “Having everything under one roof helps the clients more easily access services and it also helps with communication. We can really just call up the stairs if we need to talk to a client or anyone from the staff.”

In addition to emergency housing, the Guest House provides short- and longer-term housing. The short-term program is generally for men who have just lost their jobs and need a place to stay. The longer-term program can be up to two years, as long as the men are making progress toward achieving their goals. Typically these men have mental illness or abuse drugs or alcohol.

One of these men is Michael R., who has stayed at the Guest House three separate times to be treated for drug abuse.

Michael grew up in a culture where drugs were a normal part of life. When he was in fifth grade, he started stealing marijuana from his mother’s purse and smoked it with a friend on the way to elementary school. Ten years later — his life having become consumed by alcohol and drug abuse — Michael checked himself into the Guest House because he realized he needed to make a change.

Michael said he appreciates the clinicians and the way they work with each client individually.

“All of us men come from different walks of life and have different stories, and the clinic does well in helping us with our own goals and helping us decide if we really want to get better,” Michael said.

His first two times, Michael came to the Guest House because a family member wanted him to get better. But this time is different, he said with conviction. This time Michael wants to get sober for him.

“So far, my life has been like coming up to a dark tunnel, but right when I walk in I run back out,” he said. “This time I want to make it through to the other end where the light is.”