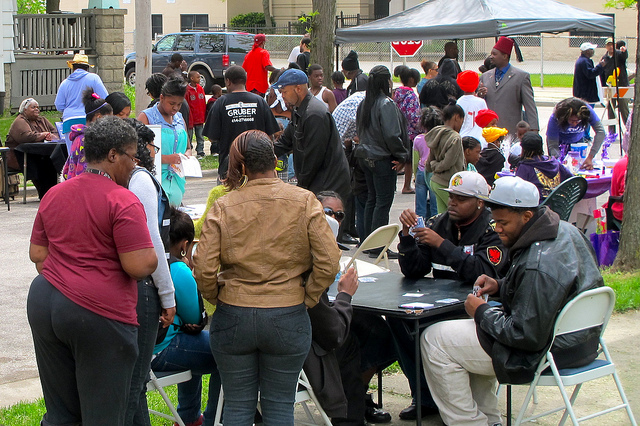 Neighbors gather near 9th Street and W. Ring for Heal the Hood. (Photo by Brynne Ramella) 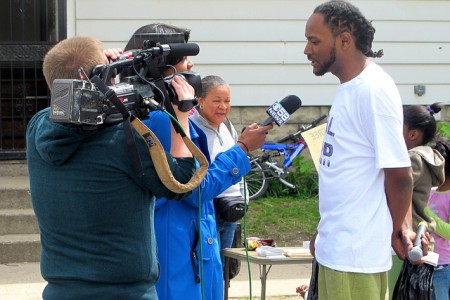 Organizers Dominic Carter and Ajamou Butler circled the block near 9th Street and Ring with a microphone, urging residents to “Show some love for the community.” Vendors lined the streets, selling food, books and “Heal the Hood” merchandise. Girls were given free manicures and boys got free haircuts. A DJ played Beyoncé and other music. People laughed, danced and chatted with their neighbors.

The event was the sixth in the past year put on by Butler, 21, who founded Heal the Hood. They included lectures, seminars and workshops, all dedicated to building the community.

“It was a way for me as a community activist to put my stamp on the movement,” Butler said. “I’m doing my role to make this city and the world a better place.”

Carter said he decided to join Butler in hosting the block party because he was impressed with Butler.

Author E.J. Brock, who sold religious-themed fiction, said she admired the idea of Heal the Hood. “If people know you, they won’t be breaking in,” she added.

Markus Thompson said he decided to volunteer at Heal the Hood because it is a good cause and a good time for the community. As it began, he said he hoped to see “a righteous, positive energy rain down on the event.”

The uplifting atmosphere impressed several attendees, including Dawn Powell, who has lived in Harambee for 30 years. She said she first heard about it from friends discussing a community garden at the beginning of the year.

“If people can band together to shield a garden, they should shield a neighborhood,” Powell said.

Andre Ellis, who has lived in the area for the last 18 months, called the gathering “phenomenal.” He said he was happy to support an event that was peaceful and prosperous for the vendors, with no sign of police cars in the area.