You are here: Home / News / Arts and Recreation / Motivational speaker and poet has ‘gift for inspiring youth’
Share this...

As a child in Chicago, Kwabena Antoine Nixon learned about life by listening to stories that his uncles shared around a table and from his grandmother’s old wives’ tales. A self-described nosy child, he was curious about every little thing around him.

“I wanted to see what was going on, who was talking,” he said.

Now a motivational speaker, poet and facilitator of the program “Saving Our Sons – I Will Not Die Young,” Nixon is the one who is talking. Living on the north side of Milwaukee, he works with African-American boys to help improve their grades and attendance in school. The program serves close to 120 boys in 10 public high schools across the city.

Nixon aims to help keep the young men from the trouble he witnessed when he was their age. Gangs and crack intruded the streets. Grocery stores and black-owned businesses disappeared. Tragedy struck.

“I lost my father at 11 years old to street violence,” Nixon said. Clearing his throat, he added, “The rest of my teen years were spent just trying to stay alive.” 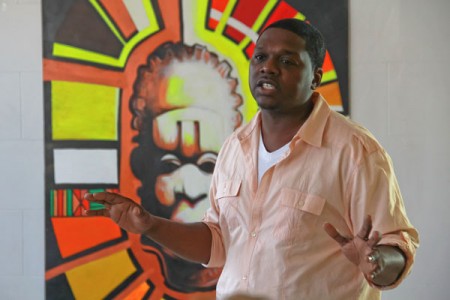 Everything changed when Nixon started writing poetry to ease his pain. He enjoyed scribbling words on pieces of paper and sharing verses with his classmates or anyone who wanted an earful. He decided he was meant to be a writer.

Nixon has written a book titled, “I Write What Eye See,” which he expects to be released in July 2013.

He also hosts one of the largest poetry sets in the country called “Poetry Unplugged” at 7155 N. 43rd St. The 10-year-old program takes place every Tuesday, and includes spoken word and open mic nights.

Nixon said he hopes the students in “Saving Our Sons” will grow through writing and speaking about their issues, just as he did. Through the program, he provides the boys with a safe environment to talk about their lives. He said he wants to give them access to the artistic medium that he wished he had discovered sooner.

“Had somebody come along and shown [the youth] what I do now,” Nixon said, the lives of many of his friends could have turned out differently.

Dafi Malik, project director of “Saving Our Sons,” noted that Nixon has “a gift for inspiring youth.”

At home, Nixon enjoys spending time with his wife, Tina Nixon, and laughing at jokes on the TV series “Family Guy.”

“I know that’s not good for the talk (working with youths), but you need a release,” he said. “And Stewie” – an infant character on the television show – “is probably the funniest – OK, I’ll stop.”

Nixon said that he wants to continue with his work and have a positive impact on society.

“It’s not so much that I was attracted to poetry as much as I was attracted to writing and expressing myself,” he said. “Telling stories of my friends, some who aren’t here now – I’m able to tell that story because I’m still here.”

About Casby Bias and Courtney Perry