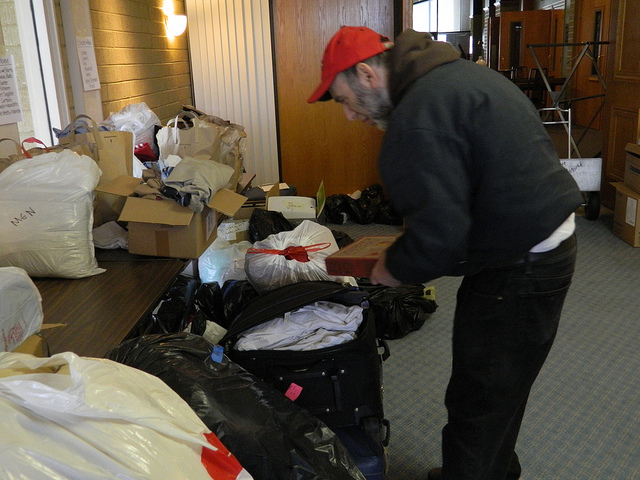 Allen Koren, a volunteer with Tikkun Ha-Ir, examines the donations slated for the Grand Avenue Club. (Photo by Eric Oliver)

The organization gathered donations at a handful of synagogues during the weeks leading up to the event, and distributed them from Temple Menorah, 9363 N. 76th St.

Judy Baruch, executive director of Tikkun Ha-Ir, said that the group hosts the drive at the request of several shelters, which are overwhelmed with donations in December and January, but by the time summer comes find that their inventory is depleted.

“One of the things we feel very strongly about is that the Jewish community cares about the people who are struggling, and we are doing what we can to assist them and make life better,” Baruch said. 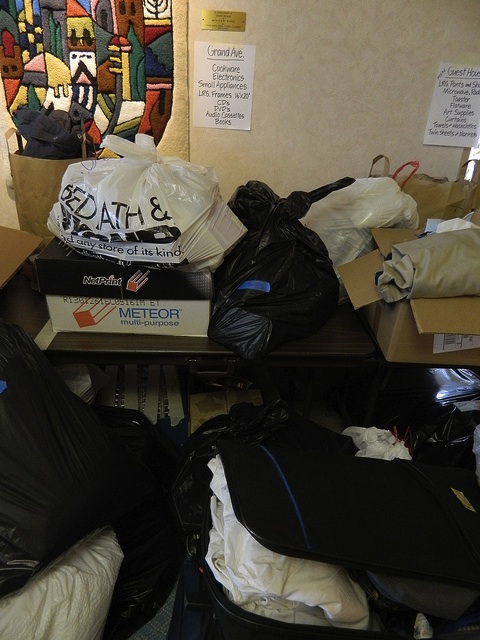 Baruch added that the shelters and agencies are happy to get the donations. Sometimes donors are equally excited to give things away.

“A couple years ago somebody came up with bags of children’s clothes and said, ‘My children are too old. I’m not going to have more. Please take them.’ And she was thrilled that we could take them.”

Baruch said that the name of the event is based on the Book of Ruth, which is read during the Jewish holiday of Shavuot.

“Ruth is gleaning in the fields and there is a law in the Torah that says that the owners of farms could not pick everything they planted,” Baruch said. “They need to leave the corners of the field unharvested, and then the poor go in and that’s how they get their food. It’s called gleaning, so we call this the Glean Machine.”

The Grand Avenue Club (GAC), 210 Michigan St., is one of the organizations that benefitted from the drive. The nonprofit helps individuals with mental illness to recover and reintegrate into society.

Pam Weisser, program director at the Grand Avenue Club, and Shelby Manuel, a volunteer there, planned on putting the donations to immediate use.

Manuel said that the group has a store in its clubhouse where it sells most of the donated items to members for less than a dollar. He added that members need the items and appreciate them.

“We keep things really affordable because 80 percent of our members are living under the poverty level,” Weiser said. “They value what they purchase and they take a lot of pride in purchasing things at really good prices, just like anyone does.”

Cullom Cahill, 24, who volunteers at Casa Marie, said that donations benefit the house and the women who are temporarily living there.

“We have a little corner at the front of the house (where) we put all the donations, and so every week the women who are staying there can go through them and take anything that they need,” Cahill said.