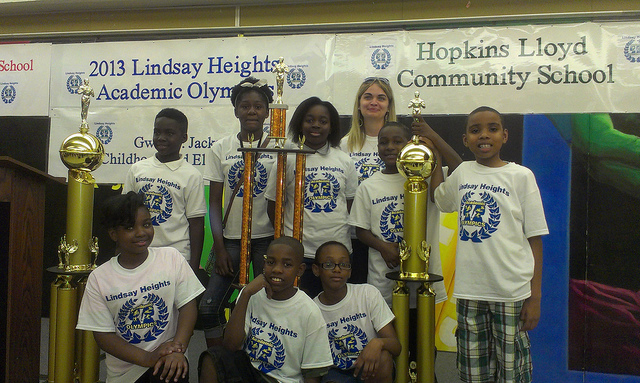 The victory was especially sweet for Trent and his parents, Leatrice Martin and Steven Cotton, who said their son struggles with ADHD and has an Individualized Education Program (IEP).

“Trent volunteered and asked his teacher if he could compete,” his mother said. “Because of his diagnosis, he feels different than the other kids in his class. But I let him know that he isn’t and that he can do anything.” 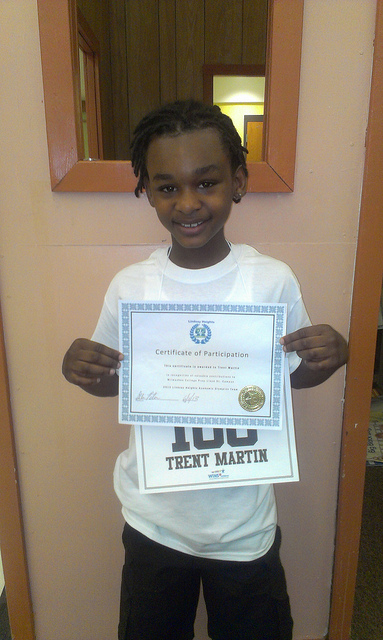 This year was the first time a spelling bee was included in the Academic Olympics, now in its third year. Third graders participated in the bee, with awards going to the top three spellers. Students in third, fourth and fifth grades competed in math.

A total of 84 students participated, the highest turnout in the Olympics’ history. In addition to Jackson and Milwaukee College Prep, participating schools were Hopkins-Lloyd Community School, Young Leaders Academy and Hope Prima School in Metcalfe Park.

School leaders and youth agencies teamed up to create the event to improve academic achievement in Lindsay Heights. “It’s a way for students across the neighborhood to be academically engaged and for the schools to collaborate in a way that we don’t see often,” said Claire Van Fossen, communications and development specialist at WINS for Children. The Wisconsin Initiative for Neighborhoods and Schools that Work for Children is an initiative modeled on the Harlem Children’s Zone.

Competing math students were given timed tests in three rounds that covered geometry, measurement, problem solving, and numeration and number concepts. Students were placed on teams based on school and grade level.

Christopher Taylor, a 9-year-old third grader at Young Leaders Academy, said he enjoys math and was excited about the competition.

“I’ve been studying and practicing my math every Wednesday,” he said before the contest. Christopher took home four awards in the math competition.

His parents, Leonard and Michelle Taylor, said they felt proud knowing their son was a part of something that rewards academic excellence. “He’s not really an athletic person,” Michelle Taylor said. “This honors his interests and lets him know it’s just fine to be good in math.”

LaRhonda Bennett, program director at WINS, agreed. “It’s important that we place an emphasis on academic excellence at their age and let the kids know that it’s ok to be smart,” Bennett said, adding that parent involvement helps makes the event a success. “We always see great parental turnout and support,” Bennett said.

In the math competition, first, second and third place awards were given in each grade level. All competitors received certificates for participating. In another “first” for the event, one school — Young Leaders Academy — took home the top trophy in each grade level.