As passing drivers honked and gave the “thumbs-up” sign, about 75 Westside Academy II eighth-graders dressed in orange T-shirts with a dove on the front and “Unity in the Community” on the back took part in a Peace Walk. Later they shared poetry and art to send a message of non-violence to their community.

“There’s a lot of young people dying of unnecessary things and I think that’s very wrong,” eighth-grader Tanovia Williams said. “I think [the event] will show that peace is way better than violence.”

The students created poems and personal symbols for the event with the help of poet and artist Nikki Janzen and artist Marina Lee. Their work was compiled into a book called “Phoenix: Rising From the Ashes,” inspired by Westside’s mascot, the phoenix. Students and others read poems from the book at an open mic after the Peace Walk. By sharing their personal losses and feelings about community violence through poems and symbols, the students hope to prevent future bloodshed. 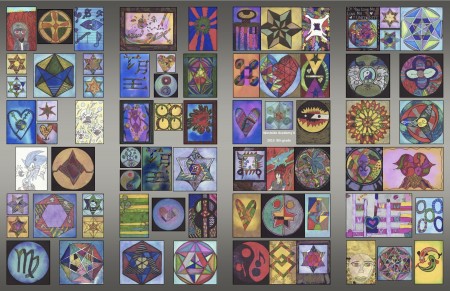 “There’s a lot of crime and kids are dying over stupid, petty stuff and our art can help,” said student Ronnie Pettis. “Instead of being in the streets they can do art.”

Some of the poems spoke about family members dying, fights and drug use. Elmer Gugman said his work was inspired by his uncle, who was killed in a drive-by shooting. Maribeth Kinnick, an eighth-grade teacher, said non-violence was the big theme in the poetry.

“Gun violence is familiar. So many have lost family members and friends,” she said. “[Poetry] is a good way to express frustration and hurt and take something positive from that.”

The event’s organizers found the art and poetry created a healing experience for many of the students.

“A lot of the children, through the process… learn to help themselves,” Lee said.

Added Sheryl Gotts, the event’s organizer, “It seemed to bring closure on some of the grief and violence they experienced in their lives.” Gotts is the director of the Family Leadership Academy and Nonprofit Center of Milwaukee.

“The art brings peace inside of me,” Glenn Turner said of his personal symbol, which included the phrase, “Help me in. Let me help you.”

This is the fourth year the Westside eighth-graders participated in an anti-violence event and the second year of the Peace Walk. Last year, a graduate of Westside was killed, inspiring the walk. Jahmes Finlayson, performing artist and Express Yourself Milwaukee music and drumming specialist, led the walk Friday. 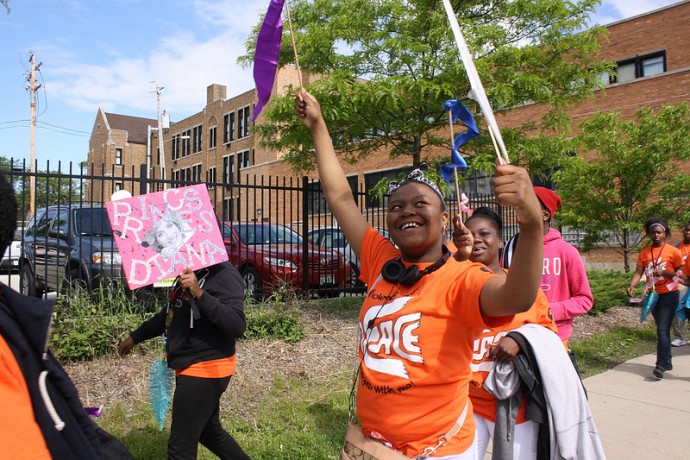 “We believe no one else should be dying,” Finlayson said to the students before it began. “We can have fun, we can have everything we want without hurting one another.”

They first walked from Westside, 1940 N. 36th St., to a memorial wall at West Lisbon Avenue and North 38th Street dedicated to young victims of violence and community heroes. At the wall, students shouted out the names of people they had lost, as well as heroes.

From there, they went to an Express Yourself Milwaukee outdoor pop-up art gallery on Lisbon Avenue, where students tied decorated feathers to leaf statues to spread their hopes and wishes for the community.

Teju Ologboni, a community leader, civil rights activist and international storyteller, also spoke at the gallery and performed a libation, or a blessing that uses water and honors the “creator of all things, our ancestors, those of us who are living and our children.” Ologboni also told a tale about the dangers of gossip and how it contributes to violence during the open mic at Our Next Generation, 3421 W. Lisbon Ave.

Austin Russel, a Westside teacher, said the event is “great” for the kids.

“They can see a sense of unity and experience the community in a different light. They can take it back to their families and spread dreams and the idea of doing something with themselves.”