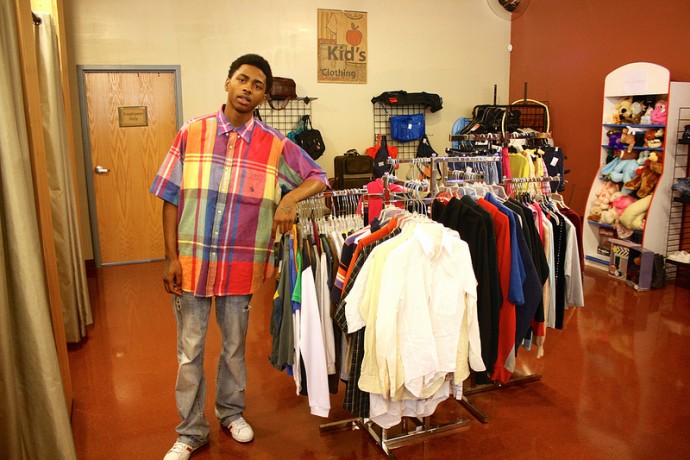 One of the responsibilities of Kendell Hynes, a Y.E.S. RePurpose employee, is to stock the store. (Photo by Maggie Quick)

While youth unemployment hit 24.5 percent nationally in May, according to the Bureau of Labor Statistics, Milwaukee teenagers Kendell Hynes, Lorenzo Fowler and Devin Robinson were employed, thanks to the St. Charles Youth and Family Services Youth Employment Services (Y.E.S.) program.

Hynes and Robinson both work in retail and customer service at RePurpose, the St. Charles resale shop at 4610 W. Fond du Lac Ave. Hynes finds every aspect of his job — “pricing, customer service, cleaning, moving stuff, all of it” enjoyable, he said. “I like working.”

All agree that if they weren’t in the program, they probably wouldn’t have jobs. That is why the Y.E.S. program was started about two years ago, said St. Charles Vice President of Organizational Development Scott Carpenter.

The four-month Y.E.S. job training program starts with a one-month internship during which participants learn the skills needed for their jobs and are coached on writing resumes, interviewing and finding jobs, Carpenter said. After they complete the internship, Y.E.S. participants work for about three months on St. Charles’s work crews.

“Over the four months, we also hope to find them community jobs,” Carpenter said. “(Y.E.S.) helps give them an edge to be productive long-term.” 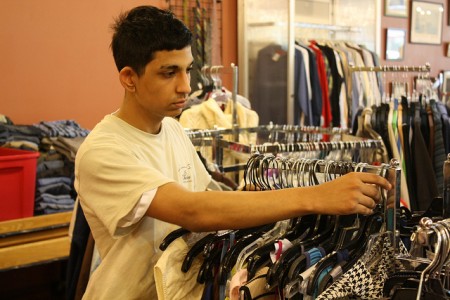 Carpenter said so far the program has seen some success in finding participants jobs once they finish the program. The youth come to Y.E.S. through connections to St. Charles and referrals from other social service agencies, Carpenter said. However, he said there is no one category that describes Y.E.S. participants. He also said being admitted into the program creates a “clean slate” for the youth.

“They are building a work reputation,” Carpenter said. “They have an opportunity to start [new] and show us what they can do. Many of them are very excited about that opportunity.”

The teens can work in one of three employment tracks in the Y.E.S. program: custodial care at St. Charles facilities, food service or retail and customer service at RePurpose, which opened May 18 and almost exclusively employs Y.E.S. participants. With these three areas, St. Charles has the vast majority of entry-level jobs covered, according to Carpenter.

Robinson, 17, started at RePurpose in April and was “part of the crew that got it up and running.” He said he would “definitely” recommend the Y.E.S. program to others.

“They actually did a pretty good job of dividing things up into customer service and basic employment skills,” Robinson said. “You get everything together to look like a professional guy who can do what’s needed at a job.”

Robinson helps customers, unloads donations, tags clothes and miscellaneous items and helps with cleaning at RePurpose. “I love interacting with the customers,” said Robinson. “I grew up in this area and the people are really cool.”

He hopes his next job is at Quad Graphics.  “It’s hard manual labor and that’s what I’m used to, and it’s a great company.”

Hynes, 16, has been working at RePurpose since the beginning of May. He works the cash register, greets customers, cleans and stocks the store. “I’ve learned about working with others, how to move things, how to clean things and how to be a hard-working young man,” Hynes said.

Fowler is in the Y.E.S. program for the second time. He started as a custodian with the program from December 2011 to April 2012. He came back through a social services agency.

“We build resumes, learn how to work as a team. Certain days we watch videos containing how to clean blood-borne pathogens, [proper] restroom sanitation, how to do custodial work the right way,” Fowler said. The teens also learned about OSHA (Occupational Safety and Health Administration) rules.

Because he is 18, Fowler can work 32 hours over five days a week. Most Y.E.S. participants work three hours for three days a week. Through the Y.E.S. program, he has received a certified cleaner certificate. When he finishes the program Fowler hopes to go to MATC and eventually become a carpenter.

Marcus Montgomery, the RePurpose store manager, said he loves working with the teens. He grew up in the central city and said he could have benefitted from a similar program. “The kids who come here come to work hard,” said Montgomery, who was a social worker for 15 years.

Montgomery tries to teach the youth what expectations employers will have of them.

“My biggest job is to make them become employable,” he said.

The store has gotten positive feedback from community members who love its mission and concept.

“The people who live in this community and Sherman Park in particular, they like what the kids are trying to do,” Montgomery said. “We’re not a cookie-cutter business but we’re something from the heart. That’s what gets people to come back to your business.”