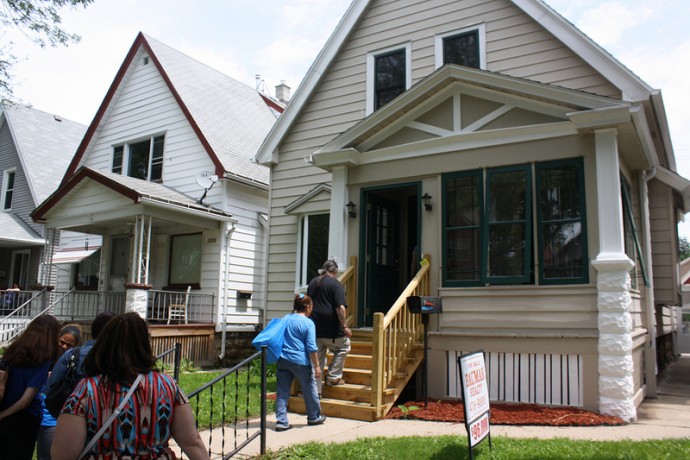 Attendees enter the sixth and final home on the tour, a single-family house at 2026 S. 29th Ave. (Photo by Maggie Quick)

Neighborhood amenities and affordable financing were front and center throughout the Layton Boulevard West Neighbors (LBWN) free Tour of Homes. About 60 people toured six houses either currently for sale or soon to be on the market in Silver City, Burnham Park and Layton Park. Many came away with a better understanding of both the home buying process and the neighborhood.

“I didn’t know there was so much going on to rebuild communities here,” said attendee Evelyn Orta. Orta heard about the tour from her coworker and brought her daughters along “because if they’re happy, I’m happy.” She added,  “I would like to live in a community [like this] that’s in the development stages. I’d like to be a part of that.”

Brianna Perez, community outreach manager for LBWN, noted that the tour “offers us a chance to talk to people who otherwise may not know a lot about the neighborhood.”

“We are lucky to have high-achieving schools like Carmen High School, which was just ranked fifth in the state,” Perez said.

LBWN is also in the process of constructing a band shelter in Arlington Heights Park, 3429 W. Pierce St., for the neighborhood’s summer concert series. A 24-acre park named Three Bridges will open July 20 on the edge of the neighborhood. 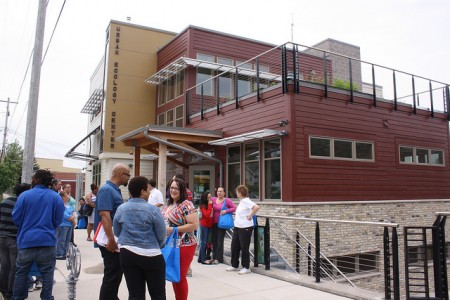 Attendees return to the Urban Ecology Center after the tour. (Photo by Maggie Quick)

The tour traveled the neighborhood by bus, allowing leaders to point out “pocket parks” on vacant lots created by the community, as well as local businesses and the six historic Frank Lloyd Wright-designed homes in the neighborhood.

The tour included two foreclosures, two regular single-family homes and two turnkey homes, which are homes that LBWN has rehabbed for maximum energy efficiency and are move-in ready. LBWN works to preserve the original charm of the turnkey homes while including upgrades and lower utility bills, according to Perez. For example, the first turnkey home on the tour  — the most expensive home shown at $103,000 — has a blow-down furnace, a foot of installation in the attic and insulated walls, according to real estate consultant Chris Trotter, who helped coordinate the tour.

Jeffrey Veglahn and his wife Beth went on the tour in October and “fell in love” with the turnkey homes because of their sustainability. They recently bought a home in the neighborhood.

“The house we bought wasn’t a turnkey house but it was recently flipped and had everything we wanted from the turnkey houses,” said Veglahn, who works at the Urban Ecology Center.

Veglahn is moving from Shorewood and learning Spanish. Among other things, he is excited about the restaurants in the neighborhood.

“It’s up and coming,” Veglahn said. “When I got the job we really wanted to be connected and commit ourselves to this neighborhood. I wasn’t just looking at homes but also looking at the community.”

BMO representatives were on hand to give lending advice. Cicily Weaver, a mortgage banker, said that the bank can help anyone and especially wants to help low-income buyers who might think their credit record will hold them back.

“We’re here because we want to help homeowners reach their dreams,” Weaver said. “There’s a lot we can offer for low-income buyers. We actually educate them in what they can and can’t do.”

Queenie Wright heard about the tour on TV and participated because it advertised financing for low-income buyers.

“I’m low-income; I’ve been sick for just about a year now,” Wright said. “I’m tired of moving … I would love to have my own house; that way I can have it the way I want to. I won’t have to deal with any crazy landlords.”

Miguel Santos came to the tour without any previous knowledge of grants and financing.

“I didn’t even know what a forgivable loan was; what the difference is between a foreclosure and a turnkey,” Santos said. “I find this tour really helpful. Even if I don’t buy a house right now, I’m getting in contact with Brianna [and the people at LBWN].”

The tour, in its third year, occurs twice a year in October and June. Some people came to look for a second property in the area. Area real estate agents also came to see what the community has to offer.

“It’s not just a home that you buy,” agreed Perez. “It’s the neighborhood and the community around it.”