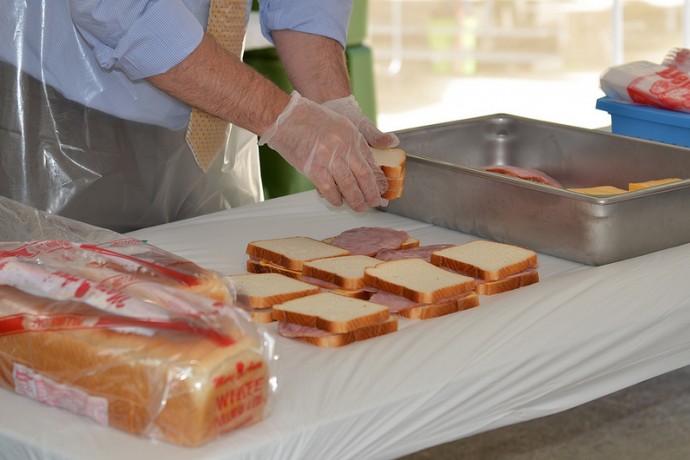 When Roger Ross, commander of the Salvation Army of Milwaukee County, drove past the agency’s van at one of 24 distribution points, no one was there. However, by the time he parked around the corner, 150 children were in line behind the van waiting for food.

For Ross, the best part of his 42 years working for the Salvation Army is seeing children get their lunch.

Before the event started Ross led the group in prayer, concluding with, “Let’s put a little bit of love with every sandwich we make today. Amen.” 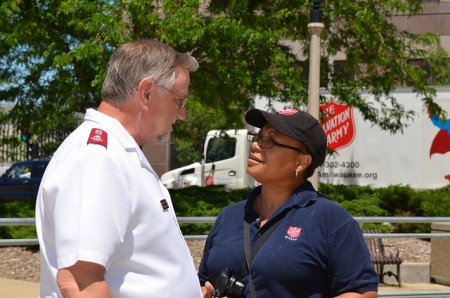 “Today is where we have volunteers and community leaders actually see what the program is like,” said Joy Cony, director of volunteer programs for the Salvation Army of Wisconsin. “Hopefully it can create awareness of our program and maybe it will generate donations and even more volunteers.”

Ross said that the group aimed to make some 1,500 sandwiches at the kickoff event. The Salvation Army distributes about 85 bag lunches to each of two-dozen parks and street corners each day during the summer. The lunches consist of a sandwich with meat, cheese, milk, fruit and a snack, and are provided to children first, then to adults waiting to get a meal.

Milwaukeeans who don’t have enough to eat can dial 2-1-1 for information about where the food van will stop, as well as where to go for sit-down meals.

According to Faithe Colas, community relations director for the Salvation Army of Milwaukee County, the organization first feeds children and then adults who are hoping to get a meal. “We don’t turn away hungry people. The reality is there are too many hungry people living in Milwaukee and sometimes there’s not enough for every child,” Colas said.

The Salvation Army operates the only mobile meal distribution program in the county.

Sandy Dadle, a volunteer, was assigned to pass out water from a cooler at the event. Dadle started volunteering at the Salvation Army when she was 10 and has continued ever since. She said she has worked in every program the Salvation Army has offered.

“Right now my favorite part is teaching at the Milwaukee Rescue Building, 830 N. 19th St.,” Dadle commented. She teaches children and their parents from 10 different cultures about similarities and differences between their country of origin and the U.S.