You are here: Home / Home / Carousel / Fathers gather to support breastfeeding for their babies
Share this... 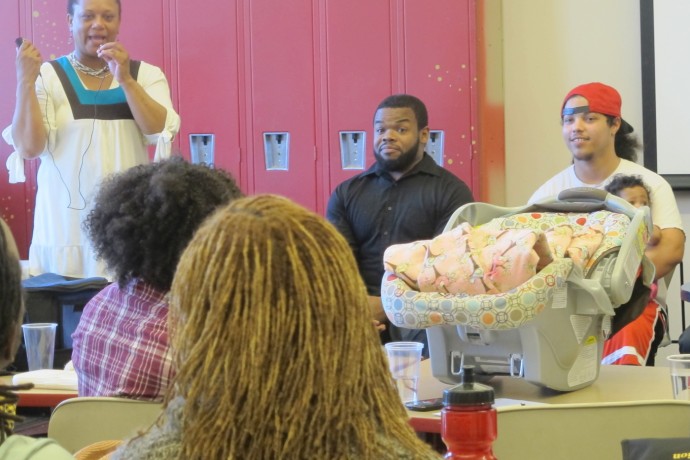 Alayna Diaz was not supposed to survive. The child of Alberto Diaz and Kimberly Hamilton, she was born three months premature and had to spend time in a neonatal intensive care unit (NICU). Each day, Hamilton brought pumped breast milk to the hospital and spent seven hours with her daughter. Diaz walked eight  miles each way to visit the baby in the hospital.

“Not only does it help the child develop, but it helps brain activity a lot more and [allows] them to get social skills,” Diaz said.

Hamilton and Diaz are members of The African American Breastfeeding Network. Along with about 25 other parents, they attended a recent program called “A Father’s Loving Support for Breastfeeding” at the Northside YMCA, 1350 W. North Ave. The network was formed in 2008 to encourage breastfeeding in the black community and increase awareness of the benefits of breast milk, among other goals.

During the program, participants discussed the benefits of breastfeeding, with a special emphasis on the father’s role.

In a presentation to the group, Darryl Davidson, a peer father advocate, told the group that a newborn baby only has three demands. Quoting Dr. Grantly Dick-Read, a British obstetrician and author of “Childbirth Without Fear,” Davidson said the needs are “warmth in the arms of its mother, food from her breasts and security in the knowledge of her presence.” Breastfeeding satisfies all three of these needs.

“It’s human milk for human babies,” said Dalvery Blackwell, co-founder and program director of the African American Breastfeeding Network. “It has the perfect ingredients for the baby and breast milk changes as the baby grows.”

Formula is no substitute for breast milk, Davidson said. For example, studies have shown that stomach viruses, lower respiratory illnesses, ear infections, and meningitis occur less often in breastfed babies and are less severe when they do occur.  In addition, breastfeeding saves money and may lead to higher intelligence.

Davidson asked the audience what a father’s role should be in breastfeeding. “Who should do the chores? Who should bring baby to mom? Who should do something special for mom? The crowd of fathers and mothers answered, “dad” to each question.

Current and expecting fathers were invited to the front of the room to share why they want their babies to be breastfed.

“I worry what’s in formula,” said Burhan Clark, father of 3-month-old Yusef. “Like how they react to it, how they digest it, how it stays in their system – it lacks a lot of nutrients.”

One father told the story of his daughter developing colic from being fed formula from a bottle. He said that switching to breastfeeding made a world of difference for her. Another father described the bond he developed with his child after feeding her his wife’s bottled breast milk. He said that to this day, his daughter is described as a daddy’s girl.

Clark, while bouncing baby Yusef on his knee, summed up the viewpoint of the African American Breastfeeding Network in a single statement.

“I just don’t see why you wouldn’t breastfeed,” he exclaimed.