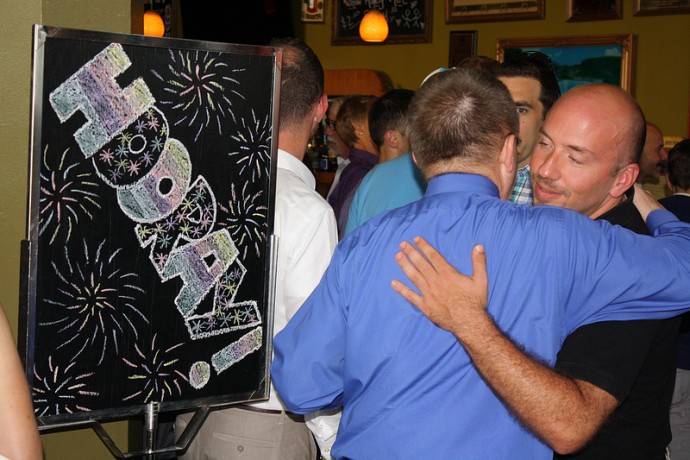 Attendees celebrated the Supreme Court’s decision that DOMA is unconstitutional at a “Day of DOMA Decision” event at Stonefly Brewery. (Photo by Maggie Quick)

The ramifications for Milwaukee residents of the Supreme Court’s rulings in favor of marriage equality will take time to sort out because of Wisconsin’s constitutional amendment banning same-sex marriage in the state, according to advocates for LGBT rights.

It is not clear when or if all federal benefits for spouses will flow to same-sex couples in Wisconsin who were married in another state, now that provisions in the federal Defense of Marriage Act have been overturned. In the case of United States v. Windsor, the Supreme Court ruled that same-sex married couples can receive all of the federal benefits available to heterosexual married couples if they live in states where their marriage is recognized.

“This is really complicated and it’s going to take us a while to know what it all means,” Kristin Hansen, development director of the ACLU of Wisconsin, said at a celebration the night of the decisions. “Everybody needs to be patient, but clearly this is a good thing.”

Still, ACLU of Wisconsin legal advisor Larry Dupuis believes some benefits will come fairly quickly, including the right of U.S. citizens to file for a green card for their same-sex spouse.

“What [immigration officials] care about is whether your marriage was legal where you were married — it’s portable,” Dupuis said. “Military [benefits] also seem to be portable.”

However, other benefits depend on where a gay married couple resides. “The IRS looks to see if you’re married where you live,” Dupuis said. “That could change by regulation or executive order. It will take some time but will almost certainly happen.” 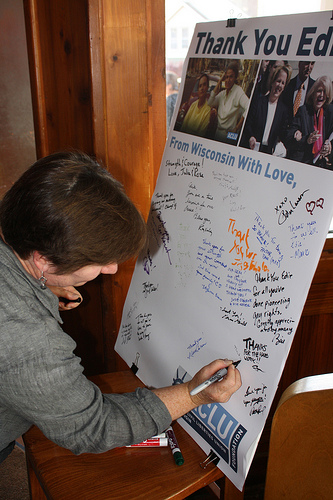 An attendee signs a card for Edie Windsor, the defendant in the DOMA case. (Photo by Maggie Quick)

“That is going to be a bigger hurdle to overcome,” Dupuis said. “It’s going to be a problem unless Congress acts, and there’s at least one house of Congress where that will be difficult to get through.”

Hansen also lauded Edie Windsor, the defendant in the DOMA case. Attendees signed a giant thank-you card for Windsor at the event.

“This is what we can accomplish as a community when we speak with one voice,” Burns said. “Our mission is forward, our job is forward.”

Santelle quoted U.S. Attorney General Eric Holder’s remarks affirming the decision, as well as a statement from the U.S. Office of Personnel Management, the government agency that implements federal benefits. He said such comments show the rulings are being taken seriously and the government is working to extend benefits to all.

Many of the attendees also expressed their happiness about President Obama’s positive response to the rulings. “I think the president’s response is very profound,” said Baraq Stein, program assistant for Equality Wisconsin. “It’s a message to the world.”

Christopher Willey came to the event to support his friends. “I’m celebrating a momentous occasion,” Willey said. “I lived in California during the initial Prop 8 [decision] and I was incredibly disappointed about that initial ruling … (but now) there is government support to back the people.”

Added Willey, “Like all things, I found out about it through a friend on Facebook, and I read the article with teary eyes.”

Burns said he too was emotional when he heard the rulings. “There is this moment of disbelief. When for so long you’ve been told by your government your relationship is not real, is not valid; [then] when you have that moment that they say it is valid … I broke down at my desk. I just had tears of joy.”

Fairchild called the day “bittersweet,” referring to the Supreme Court’s decision a day earlier to undo part of the Voting Rights Act.

He said the DOMA decision was not emotional for him. “I tend to look at it more through a lens of economic and racial justice,” he said. “LGBT people are the only underserved community that crosses every political affiliation, race and religious denomination. The damage … from the Voting Rights Act [ruling] is going to be far more devastating than the progress we made today.”

Fairchild said the DOMA ruling could harm Wisconsin’s economy, especially because Wisconsin is adjacent to two states (Iowa and Minnesota) where gay marriage is legal.

“If you’re in a same-sex relationship and you live on a border town, why wouldn’t you cross for economic justice?” Fairchild said. “Why wouldn’t you take a job somewhere where you have equal rights rather than Wisconsin?”

Same-sex couples from Wisconsin who are now considering getting married in another state should consult with a lawyer first, according to Dupuis. He also said there are “After DOMA” fact sheets that explain the ruling in terms of bankruptcy rights, taxes, immigration rights and veterans information, among others.

Many of the celebration’s attendees thought the decisions would get the ball rolling for gay rights in Wisconsin.

“I think it’s a great momentum builder,” Burns said. “(This might start) some serious conversations about marriage equality in this state.”

Stein agreed. “For us, our fight is still kind of going on,” he said. “Now there’s going to be a sense of urgency, especially in urban areas in Wisconsin. This might instill a lot of activism.”