You are here: Home / Home / Carousel / Enderis Park July 4th ‘slice of small town in the middle of a city’
Share this... 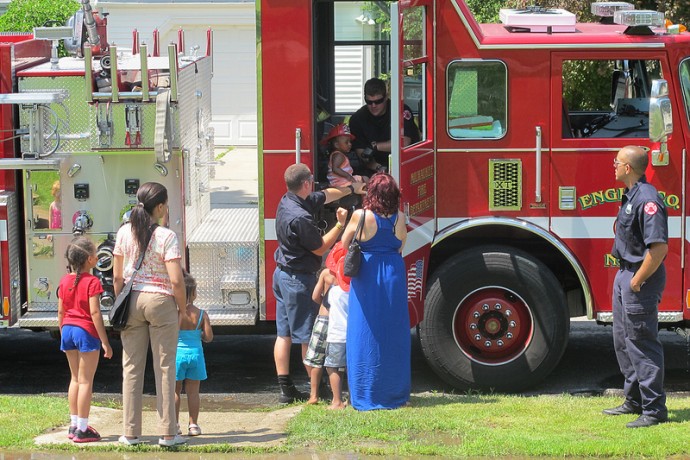 Firefighters give children a look inside their truck. (Photo by Brynne Ramella)

About 40 residents of Enderis Park were among the thousands of Milwaukeeans who put on their red, white and blue on a warm and sunny July 4th to celebrate the nation’s birthday.

Paul Sullivan and Jennifer Taylor have been going to the annual Fourth of July celebration at Enderis Playfield, 2978 N. 72nd St., for years now.

“It feels like a little Americana, with the watermelon-eating contest (and) all the little trophies” for the best patriotic costumes, said Taylor.

“The church choir singing the patriotic songs — it’s a slice of small town in the middle of a city,” Sullivan added. 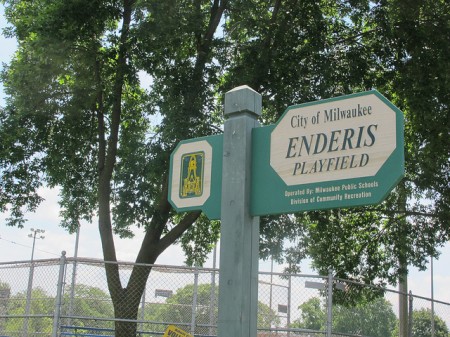 Taylor and Sullivan said that they love seeing neighborhood children excited about decorating their bicycles and climbing into a fire truck.

Firefighters stood near the truck, allowing young children to sit inside, and handed out plastic red firefighter hats. Some children ran off to pretend they were firefighters.

While the children laughed and played, adults barbecued lunches or gathered around in lawn chairs to chat . One of them, John Krupka, has been coming to the annual celebration for 14 years.

“My wife and I moved here in 1999 and it only strengthened and enhanced our perception of Milwaukee, this particular park and this neighborhood. We weren’t really aware of the strong traditions that they have here, so this brought another component to what we think of this neighborhood.”

Since then, Krupka and his wife started a family and raised their children with this tradition.

“I have two children, ages 9 and 11 now, but they have grown up coming to this,” he continued. “They decorate their bikes — it used to be wagons, then it used to be strollers. We still enjoy it. It’s great.”

Kathy Grothe, who has organized the event for the past decade, said that she has seen the positive effect that the celebration has had on the neighborhood over the 10-year period.

“When you look at America, it’s built on its communities. You have to build communities before you build a strong nation,” she said. “So, for the nation’s birthday, we work at getting the neighborhood together so we can celebrate as a community.”

Enderis Park residents such as Taylor and Sullivan, who come year after year, are proof that the residents enjoy the neighborhood’s annual Fourth of July celebration.

“It brings people closer together and keeps people involved in things like neighborhood watch,” Taylor said.

“It builds a community,” Sullivan agreed.